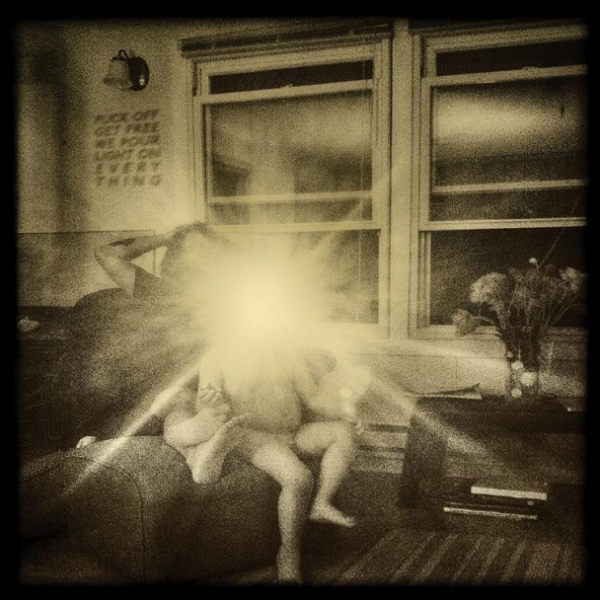 Fuck Off Get Free We Pour Light On Everything billows and bellows with rage and fire from the moment the brief child spoken-word intro fades and Thee Silver Mt. Zion Memorial Orchestra burst into opening track “Fuck Off Get Free (For the Island of Montreal)”. Long gone is the band that began their career as a kind of post-rock chamber orchestra playing sensitive meditations, as found on debut record He Has Left Us Alone but Shafts of Light Sometimes Grace the Corner of Our Rooms. Whether or not the reconvening of Godspeed You! Black Emperor has roused some forgotten punk spirit in Thee Silver Mt. Zion (TSMZ), this five-piece incarnation of the band is now a completely different, and better, beast.

It’s fourteen years since Efrim Menuck (along with original members Sophie Trudeau and Thierry Amar, and now David Payant and Jessica Moss) launched TSMZ as an outlet for more experimental music than he played in Godspeed, and while early records displayed a more reflective and restrained ethos, TSMZ gradually changed into something quite different once Menuck finally believed in his singing voice and the song-structures he was guiding the band towards. Once we reached 2009’s Kollaps Tradixionales TSMZ didn’t just share an ethical and ideological outlook with heroes of Menuck such as Black Flag and Fugazi, they sounded like a punk rock band, albeit with a lineup who were comfortable handling instruments like violin and cello.

And so here we are with Fuck Off; an album that’s Menuck’s show from start to finish, dominated by his searing and coruscating guitar work and agitprop vocals we know exactly where TSMZ’s anger comes from. Now the heart and soul of the most fiercely independent record label around (Canada’s impeccable Constellation) the album rages at the world today: interventionist policy, global financial meltdown, injustice, greed and death, in the case of the latter, particularly that of the late Pro Era crew rapper, Capital Steez who is memorialised in the closing orchestral coda of “Rains Thru The Roof at Thee Grande Ballroom (for Capital Steez)”.

Words like fucking “austerity” – like we’re all part of some giant workhouse and we should be eternally grateful for any morsel or penny our rich owners deem to occasionally toss in our direction as they get disgustingly corpulent at the top table – clearly generate anger in Menuck, as the fourteen minute unhinged riot of “Austerity Blues” is testament to. That song is the best moment on Fuck Off, beginning with an acoustic strum and Menuck’s captivating sing-chant vocals before building through soaring strings to a pummelling hard rock finish (TSMZ are as adept a metal band as they are a chamber orchestra) with Menuck conducting the band through a series of stunning solos and delivering the key lyric: “Lord let my son live long enough to see that mountain torn down”. Anger is very much an energy.

The aforementioned opening track is a more structured take on “Austerity Blues” but “Fuck Off Get Free” doesn’t shy away from addressing you head-on, nor does the see-sawing “Take Away These Early Grave Blues” where Menuck adopts a clipped vocal style that’s as much John Lydon as Guy Picciotto over layer upon layer of apocalyptic strings and brutal percussion from David Payant. There’s almost some restraint on the closing-time sway of “What We Loved Was Not Enough”, the “kiss me quick” lyrics revisit the title of side two of the band’s debut album, The World Is SickSICK (So Kiss Me Quick), proving that while TSMZ might have changed, the world’s not changed quite enough for Menuck and company.

Age and time haven’t withered the power of Thee Silver Mt. Zion; if anything, this five-piece incarnation of the band has distilled all that free-jazz/post-rock/orchestral/folk/punk/metal influence into a record that’s the best work the Canadians have produced to date. In a world where little seems to change for the better, Menuck’s anger is more vital and relevant than ever. Fuck Off. Get Free. Pour light on EVERYTHING.