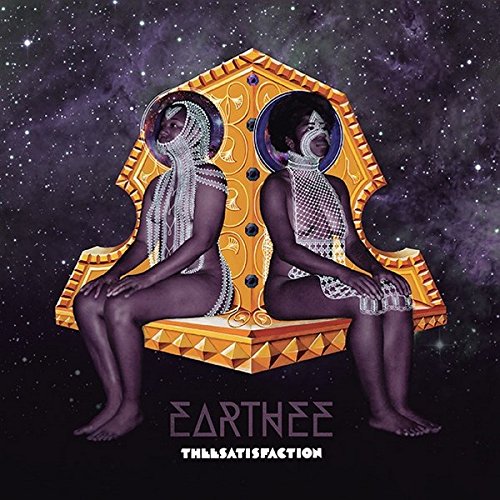 If you’re normally averse to any band whose name features both capital and lower case letters like jumbled text speak, THEESatisfaction may well be an act to make you think otherwise.

Their criminally underrated 2012 debut album awE naturalE was enough to introduce their alternative and futuristic R’n’B style to the world via Sub Pop Records. But now, having stewed on their unique grassroots sound for a few years, they return with second offering EarthEE.

The duo, made up of rapper Stasia Irons and soulful songstress Cat Harris-White, met at open mic nights in Seattle. For this latest offering they've partnered once again with long term collaborators Shabazz Palaces, as well as new label mate Porter Ray, Meshell Ndegeocllo and polymath Erik Blood, who doubles as co-producer with the girls themselves.

Like all their work, threads of social awareness and reflection weave their way over the bedroom beats. Where previous work has spoken about female beauty and associated expectations, this new release has a focus on the ever-pressing issue of the environment, with songs such as "No GMO" and "Planet for Sale" being more than overt in their message. THEESSatisfaction deal with what they know with the songs relaying the problems of everyday life and their observations. Recorded between their native Seattle and Brooklyn, what the pair has cooked up is a dreamy and honest blend of beats, soulful choruses and loosely spat verses. It feels organic, not forced, with unpretentious productions making the most of the lyrical content.

Title track "EarthEE (feat Shabazz Palaces, Porter Ray and Erik Blood)" is for example a jangly haze of electronics and airy vocals that breaks into layers of alternating call and responses. It doesn’t necessarily stay in your head all day but when the drawling rhymes cut in there is attitude and thought provocation in buckets. It feels gritty and probably a fair approximation of what life is like in the inner city America (at a guess).

What makes the edge though the slightly dystopian gaze through which everything on this album is filtered. It all feels slightly ominous, fording even, in its execution. ‘Post Black, Anyway’ is a perfect example of this where darkness is prevalent from the start and the cutting repetition in the spoken chorus gets more a more unsettling as it evolves. "Universal Perspective (ft. Meshell Ndegeocello)" feels at points like it might break into something more poppy but it never quite gets to where you imagine it will. That’s not a bad thing though; this is a band that seems to thrive off not going down a mainstream hip hop route. They could make something more danceable, but it’s all a bit too artful for that.

The intro to "Recognition (ft Sabazz Palaces and Erik Blood)" plays nicely with vocal experimentation and is a cleverly thought out number but again, what this album has in intelligence, it lacks slightly in anything more joyous. But then again, if the world is going to pot, maybe there is a reason EarthEE all feels urgent and pensive.