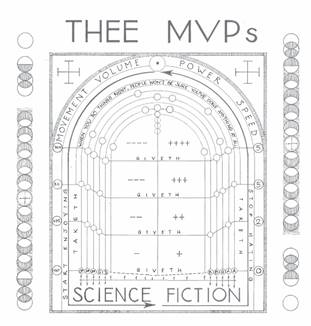 Holding aloft sentiments of social awareness and camaraderie, and with a commitment to communicating them as loud and fast as possible, The MVPs have never tried to be cute about where their interests lie.

Whether it’s the intensely bruising “Jerry” or the rattling “Edgar”, the band have won plaudits for their forthrightness and energy, both live and on their releases to date. This is a group that clearly loves to make noise, and have proven themselves capable of creating an especially riveting racket. Science Fiction, the band’s second full-length, continues to bear this torch with aplomb, drawing on a range of sounds from krautrock to punk and distilling it into a furious, sweaty and erratic collection of songs.

Channelling the visceral and unyielding commitment to the cause of Hot Snakes, the thrust into the violent group hug of opener “Ship Episode Planet Episode” is a telling one as it introduces two key tenets of the band’s philosophy: a dependent connectedness (“I have faith in the crew”) and a desire for something better (“Live long and prosper”). In a world under lockdown, the buzz and camaraderie takes on an extra air of liberation, even if it induces fervent foot-tapping as opposed to opening a pit.

Despite much of Science Fiction revolving around this necessity of being connected, Thee MVPs are equally concerned with intrusive elements of technology and modern life. “Super Contactable” derides the inability to fully cut yourself off from contact, whereas “SESH” deals with another form of invasive behaviour, the antagonist this time the pervasive threat of excess. This ranging series of takes on pressures in today’s world feel particularly apt, reflective of a world that is slowly eradicating the sanctity and purity of the private self.

Unfortunately, Science Fiction however relapses into songwriting both protracted and banal too often to deliver the sucker punch the band were so clearly edging for. The unending outro to closer “US Airways (Final Flight)” drags us through a sequence of impressively dull instrumentals, multiple listens not making it less baffling that the option of substantially trimming it didn’t win out. The same can unfortunately be said about the stunted rhythms in “Funeral I and Iii”, the result little more than a one-dimensional and largely uninteresting six minutes.

Protracted, expressive and humming with angst, Science Fiction then is an effective if flawed release. At its best, it manages to display the furious camaraderie, frustration and feeling of deterioration experienced by many, yet this is counterbalanced by occasional pivots to redundant cliches and a lack of imagination. While the band's core principles retain much of their dynamism from previous releases, overall Science Fiction feels like it could have done with some additional refining, like it’s still a little frilly. And let’s be honest; no-one really likes the frilly bits.