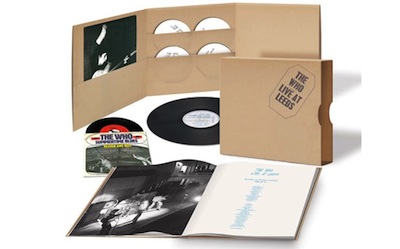 In the digital medium, super-deluxe box-sets provide something of a quandary. Much like – I would imagine – when someone less honest than I illegally acquires an artist’s entire back-catalogue by some perfidious cyberspace means only to find it languish in their portable music library wasteland for want of not knowing where to begin with such vast quantities of squashed sonic spoils and no context to speak of. So a digital-promotional copy of The Who’s Live at Leeds 40th Anniversary release doesn’t really do The Whole shebang much justice, not when you consider it contains two CDs encompassing the full Leeds show from 14 February 1970 recorded for the original album including the complete performance of Tommy. As well as – for the first time ever – two CDs containing the Who’s complete performance from Hull. Not to mention a heavyweight vinyl reproduction of the original six-track album as it was released in 1970, a new 64-page hard-back, colour book containing rare photos, memorabilia from the original release – replica contracts, letters, poster gig list, photos – and liner notes detailing the history of this landmark album. You want more? Ok there’s also a replica 7inch single of ‘Summertime Blues’ / ‘Heaven & Hell’ with colour sleeve, and a classic Pete Townshend poster all housed in a hard-back box with cover artwork reproducing the original black stamped vinyl first UK pressing which, according to the July 2010 edition of Record Collector magazine, is now valued at approximately £250 in mint condition. Anyways, where’s my USB stick so I can listen to these Mp3s.

Earlier this year the American alternative-rock band, Quasi opened up their set at All Tomorrow’s Parties with a rousing performance of John Entwistle’s ‘Heaven and Hell’, witnessed by this avid fan, it was superb, ferocious and driven, it has taken until now – largely due to tardiness – to seek out and re-acquaint one’s self with The Who’s finest hour, Live at Leeds. The original record only contained six recordings, the 25th Anniversary edition, the one which was released during my own formative years was a healthier 14 songs, since then there has been versions bulking it out with two-discs including another whole set of the material from Tommy. This is expanded again this time to include a near-enough identical set and performance from the band that took place in Hull.

These ‘lost’ recordings are easily the equal of the Leeds concert, with the aforementioned ‘Heaven and Hell’ bursting out of the speakers, as loud and proud as they come, as if the band is trying whole-heartedly to blow the PA with sheer energy. Ripping through a blinding set with little breathing space, check the transition from full-throttle rocker, ‘Fortune Teller’ to the tinkering jollies of ‘Tattoo’, tight as you like, and then the full-on hat-trick of pop nuggets, ‘Substitute’, ‘Happy Jack’ and ‘I’m A Boy’, the latter sounding particularly fierce with stunning counterpoint between Townsend’s guitar and Moon’s drums. The virtuoso instrumental work is, as you can imagine, jaw-dropping. Entwistle’s bass is all over the place, and Keith Moon frenetically thuds the kit with boundless energy but as a rhythm section they’re always fat and sturdy, and whilst you’re always aware that Entwistle is firing out high-speed runs – listen to ‘Young Man Blues’ and try not to tire yourself out – or that Keith Moon’s fills are beginning to sprawl out to ridiculous lengths – check out the ‘Ivor The Engine Driver’ passage on ‘A Quick One While He’s Away’ – there’s never any point where you feel like the whole thing is going to collapse, they’re as safe as houses. Which gives Townsend freedom to batter, torture, and windmill his guitar as much as cares too, and on the marathon version of ‘My Generation’ he does all of those things and oh-so-much-more in true guitar-guru style. Roger Daltry has arguably the hardest task of any of the quartet, trying to make one lone voice sound as primal and vital as the face-melting rock that backs him up, he does succeed particularly throughout the performances of the acclaimed rock opera Tommy.

The late great Keith Moon said at the time, “we don’t make particularly good records. We have good ideas but not always a good sound. We are difficult to record because we don’t work in the studio any different in the studio to on stage. Drumsticks are in the air when they should be on drums and arms are flying when they should be on guitar”. It’s very true, and despite being a big fan of many of The Who’s studio records, none of them have captured the essence of the band so as much as these iconic recordings, I can only imagine what goodies the record company have held back for the 50th Anniversary Uber-Duper-Whooper- Edition.