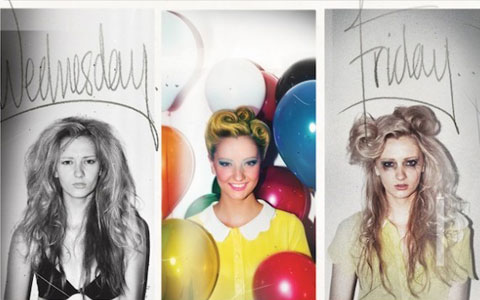 For someone who spent so much time making people guess about who and what The Weeknd was and is, Abel Tesfay seems to have done a 180 in turns of mystique, and hasn’t really left the minds of bloggers, new-music lovers and hipsters alike since he released his debut mixtape House Of Ballons back in March. And considering the rave reviews his recent live debut received neither has the hype surrounding him. This short widespread musical appreciation being at an all time high last Thursday when his site crashed, due to the amount of people The Weeknd releases second mixtape" href="http://www.thelineofbestfit.com/2011/08/the-weeknd-releases-second-mixtape/" class="ext-link" rel="external" target="_blank">clamouring to download his then just-released new mixtape/album Thursday.

Although lyrically Thursday treads along the same boards (the hedonistic highs and emotional lows of love are again the main topic here), musically this isn’t House Of Ballons MK II. Not a mere extension nor a complete departure, Thursday is more Tesfay reacting to the copious amounts of internet love that’s been showered upon him during these past months. As a result of all eyes being firmly on him, Tesfay is more confident in his abilities and therefore more ambitious and experimental in the way he approaches his music.

Eager to showcase this, the most leftfield tracks bookend this mixtape. Opener ’Life Of The Party’ is Tesfay’s most exhibitionistic statement to date, with creeping marching percussion leading the way for the hard-hitting combination of heavy electric guitar and blary synths that arrive in unison to usher in a big stark chorus. After a couple of spins what originally seems jarring, comes off as a successful experiment. Finisher ’Heaven Or Las Vegas’ may be not so extravangant but makes a transition from faux-opera beginnings to a sultry dub reggae/soft-rock hybrid.

On the other end of the spectrum, ‘Rolling Stone’ is the most stripped-back we’ve heard The Weeknd, gentle strumming, and minimal percusion allows Tesfay to fully demonstrate his vocal potential, crooning: ”I got you” / “Until your used to my face” / “And my mystery fades” / ” I got you”. His reverbed falsetto reaching never-before heard heights, proving that even without the DIY mystique and esteemed endorsement (fellow Canadian Drake is partly responsible for this latest internet phemonomen thanks to his tweets of admiration), there’s true talent here.

Whilst The Weeknd has slowly begun to sonically branch out and experiment, the mood that’s ultimately conjured hasn’t changed. Layers and structure may be more complex thanks to different instruments coming to the forefront but for the most part, songs sound as bleak ever. Again smouldered in druggy electronic, slick 808 percussion and reverb vocal effects, his songs still sound like they were created hours just after the acts of despair he talks about happened. Laments of comedowns, where the endorphin rush fades and reality sets in and self-epiphanies begin. ’The Zone’ encapsulates this sluggish downcast aura brillantly, levels of personal intoxication increase with each listen and a guest spot from rap’s equivalent Drake takes things up a dramatic notch.

One could say it’s the male equivalent of Janet Jackson’s Velvet Rope and, much like Jackson’s masterpiece, causes of upset vary from depression to meaningless sex. But Tesfay’s lyrics don’t quite do the emotional drama on display justice; eloquence is a trait Tesfay is yet to learn and it’s more the conjured mood rather than what’s actually being said that’s doing the talking here.

All in all, Thursday is a well-accomplished step forward for The Weeknd, a musical project clearly not interested in resting on its laurels and already thinking about taking R’n’B to unexplored leftfield terrains. Expect an even bigger internet ruckus when his next mixtape Echoes of Silence drops later this year.

Join in on the hysteria and download The Weeknd’s Thursday mixtape at the-weeknd.com