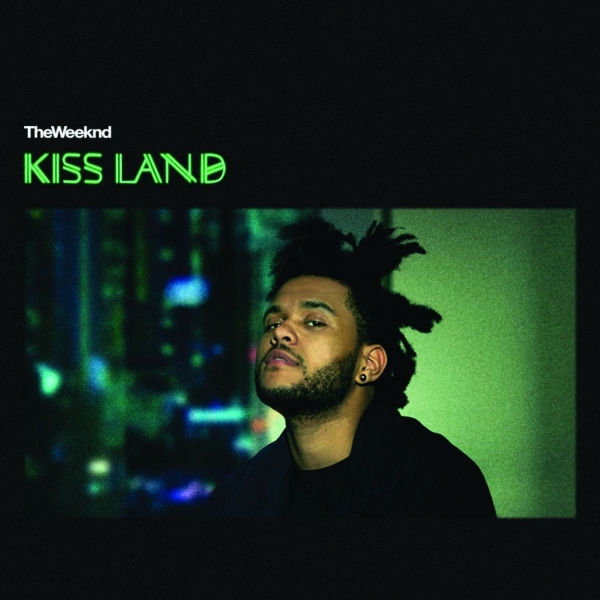 Though we’ve had a plethora of vital soul/R&B acts over the past few years, none quite reach the zenith that Abel Tesfaye lives on. His triad of EPs, which eventually conjoined for The Weeknd’s first ‘album’, Trilogy, received almost unanimous applause. As such, it’s with much anticipation that his debut proper, Kiss Land, arrives.

Where Trilogy also dealt with the Cronenburgian parties that Tesfaye laments, there, he did it with a subtlety. Whilst it wasn’t entirely a subtext, compared to what his lyrics are like on Kiss Land, they’re comparative riddles. He talked of a simpler, more personal time where his only real worries were the effects of drugs and coked-out booty calls; the emotion was an introspection and a mediation on stories from his past and/or present; his words divulged an ennui rather than an all-out crisis of sanity.

His nihilism has been exacerbated by two years of industry pressure, overexposure and critical accolades; he’s toured excessively, and going from a barely-known to a world-famous man has taken its toll upon Tesfaye’s frame of mind; surrounded by façades and cutthroats, he’s a lost man. This is a diary of his inner turmoil and cerebral sins; he may not be a saint in practice, but this album’s not really about that.

This is a concept record about a distraught mind – the sex is, in part, a device. Women, rather than being objects to be used, seem to be figurative elements of his sturm und strang. It’s a coming-of-age record in some ways (he’s still only 23), full with explorations into this wilder world, or more specifically, fame, and how it reacts to him as he ventures into fresh arenas. The hypersexuality that occurs is a mere by-product. Its unavoidable flirtations with misogyny, if given a sympathetic reading, are more like visceral descriptions to allude to his fear, pain, loneliness and paranoia. It’s a literary technique to shock and subdue the listener into the same grotesque, twisted shell he struggles with. True, it still has hooks and choruses, but it’s also a disturbingly realistic discussion of a man torn apart by an industry he doesn’t fully understand, and in the wider context, about a generation who seek to escape reality via sex, drugs, parties, facetious distractions and celebrity culture in a bid to shy away from the horrors of reality.

‘Kiss Land’, the track and lead single, is doused with innuendo and single-entendres – “When she put it in her mouth she can’t seem to reach my…”, “The only thing you’re taking is your clothes off,” and “I make her suck it with gold grills/In the back room of the VIP/ she don’t ever sleep…”, all are prime examples of Tesfaye’s salacious vocab. More seriously though, away from his anecdotal pillow talk and naughty tongue, this track is wholly alarming. In his melted-brain pharmaceutical psychosis, the synthetic sedatives distort the tune. It’s filled with x-rated obscenities, yes, but they obscure a deep-seated angst, touched upon in the telltale verse: “And I don’t got any friends,”

It sets a precedent for a record rife with red-light-district morsels and stellar production. Opener ‘Professional’ opens into an exotic soundscape, flecked with Oriental titbits and expansive synths. Where a lot of soul and R&B focuses on the voice or the singer, Tesfaye doesn’t have a spotlight on any one element: the lyrics are gorgeously erudite with sprawling diction.

‘Adaptation’ best captures his wide-eyed horror. With skittish, paranoid drums and minor-key harmonies, you’ll be constantly looking over your shoulder after hearing it. When he sings of “the one”, it’s about his loss of real life in exchange for celebrated glory, and the regrets that follow. ‘Love In The Sky’ rattles with ’80s cock-rock axes and stabs of new wave synths; the effort is lit by neon flickers, and it embodies an anxious disconnection from the living world: “This world’s not for us/ it’s not what it seems.” ‘Belong To The World’, a Kanye-esque barrage of alienation and flawless musical experimentation, is a kind of trapped-in-a-corner meltdown. On it he compares himself to a prostitute, saying he doesn’t want to just slip it to a hooker, but is empathising with her ‘selling herself’. It’s a frantic fracas, brimming with thundering riffs and shimmering, terrifying hooks. Amidst the turbulence, Drake and Kavinsky appear on various songs (‘Live For’ and ‘Odd Look’ respectively), but like most of the record, they blur and warp; everything moves in a ecstasy-haze slow motion.

There are some ball-drops when it comes to that focal theme of dissatisfaction and identity loss – clearly he’s desensitised to the game he plays. On the above-mentioned ‘Live For’, where Tesfaye shares the mic with Drake, it’s considerably more crass. His sense of ownership on ‘Pretty’ is kind of unnerving too. Sex may be playing a big part in his recurrent self-loathing, but drugs do also, and that’s a palette that’s largely shunned. Maybe it was a conscious effort to alienate with gutter-mouthed antics rather than chemical ones?

In all though, Kiss Land succeeds on not only being an album in the assumed sense of the word, with big singles, tasty hooks and singalong phrases, but as a concept record too, one that takes you hostage. Tesfaye carts you around his dystopian world, forcing you to experience his countless agonising emotions and erratic mindframes. He pulls no punches, and while some of it is for the boudoir, some is an emotional exposé, some is traditional R&B fare, some is avante-garde compositions – and it’s all fantastic. There’s a reason that Tesfaye is plagued by the acclaim he is, and this is it.