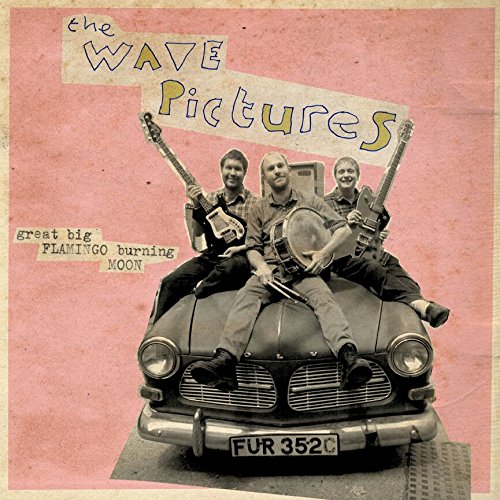 For a collection of average guys from the Midlands, who first grabbed our attention at the height of the landfill indie era, The Wave Pictures have proved themselves to possess an unlikely degree of staying power. Since they signed to Moshi Moshi and released Sophie back in 2006, their back-catalogue has grown lengthy and is crammed full of collaborations and tours with the likes of Daniel Johnson, Jeffrey Lewis and The Mountain Goats. On this score, at least, the band show no sign of breaking the habit of a lifetime. This latest LP is made in collaboration with controversial writer, musician and artist Billy Childish, of Thee Mighty Caesars fame.

The band are not shy about admitting that Childish is a hero of theirs – if words weren't proof enough of this, their homage to Thee Mighty Caesar's “WiIey Coyote” on “Katie” definitely is – and, for once, it seems that meeting a hero didn't turn out to be disappointing. Unlike the quirky indie sing-along hits of Instant Coffee Baby, every track on Great Big Flamingo Burning Moon has swagger and self-assertion; listening to this record is a bit like seeing that adorkable boy from school six years down the line. And now he's become a man.

This record is doused in the sound of americana that marks The Wave Pictures' more recent records, with the bass-ass, tooth-pick chewing distortion of The Modern Lovers' guitar parts and a healthy dose of harmonica. Needless to say, when you try to graft this archetypally American, James Dean-style sex-appeal onto three lads from Leicester, the results can be pretty unconvincing. This time, though, they seemed to know what they were doing.

“I Can Hear The Telephone (3 Above Me)” and lead single “Pea Green Coat” are both tight, classic rock songs, with Tattersall's signature lyrics bringing small, everyday details – the distant sound of a phone ringing, the colour of girl's coat – into sharp focus. Childish kept the album close to its roots by encouraging the band to stuff the middle of the album with not one but two Creedence Clearwater Revival tracks (“Green River” and “Sinister Purpose”). It's an unexpected move, but one that ensures you simultaneously understand both where this LP is coming from and where it is going. That typical Wave Pictures tenderness hasn't vanished all together, however. “At Dusk You Took Down The Binds” is a story of cozy domesticity and affection, as told through animal imagery, with a couple "bristling” and curling up “like hedgehogs”.

So, it seems that band that once loved us all like madmen have mellowed and become more self-assured with age. But they've definitely not lost their spark.