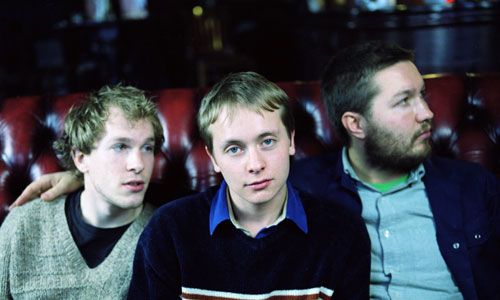 Beer in the Breakers opens with one bright chord: it lasts less than a second but is an immediate manifesto of everything The Wave Pictures are: vivid, nostalgic, tasting of citrus. And then it unfurls, scroll-like, tumbles out over the rocks, the sand, the battering drums, the battered seafood. You’re there: “I swam out to greet you / left my wallet in my socks / in my shoes in the sand / and I swam” – you are immediately there, because this song ‘Blue Harbour’ is exactly what screwing around in the sea sounds like. From here it’s an album’s worth of salty seaside romance, and you can struggle against the undertow but you’re always irrevocably in it.

The band’s releases are well into double figures by now, some on labels, some off, all with a similar Xerox aesthetic to the covers but losing their lo-fi sound over the past five years. It was this newfound focus that drew so much attention to Instant Coffee Baby in 2008. The album was an art gallery of itself, beautifully lit and temperate for more intimate perusal of David Tattersall’s guitar and Dadaist lyrics, the soft, clambering bass of Franic Rozycki, and the Jonny “Huddersfield” Helm’s shuddering, gleeful drums. Not forgetting their solos; they deserved their own wing, or to pitch and flutter through the Turbine Hall, they… well, maybe enough fangirling has already been fangirled over Wave Pictures solos. You’ll just have to believe the hype.

Somehow, the two albums that followed, If You Leave It Alone and Susan Rode The Cyclone, merely grazed the very high bar that Instant Coffee set. So it’s a pleasure to report that the new record is absolutely without filler. It presents the perfect mixture of the band’s beloved minor key ballads and equally characteristic rock’n’roll ecstasies. The guitar that brims and bubbles from ‘Little Surprise’ is halfway between African pop and classic Herman Dune, and the influence of other pals, like producer Darren Hayman, is never far away. There’s no doubt that the Hefner spirit stirs somewhere in the high reverb, hot dry drums and cracked heart of ‘Walk the Back Stairs Quiet’ and ‘Pale Thin Lips’. Little surprise there – the album was recorded at Hayman’s house. In one day, too, giving the recording a luxuriant, freshly-baked warmth.

Despite revisiting favourite chords and influences time and time again, these tracks consistently dodge being derivative. They’ve at least one of those masterclass solos each, they’ve got sexy dark flavours of surf-rock and blues coming through like never before, and they’ve got Tattersall’s lyrics – though these are less esoteric than the “sculpture of marmalade” frivolities of a few years ago. The evolution of his lyrical style can even be tracked from ‘China Whale Brand’, which was written long ago (all in in-jokey coding like “a picnic in the pentagon / a manchild on the make”). The new songs have a narrative to glue together the imagery, and the result is pure poetry – such as the impossibly sweet ‘Two Lemons One Lime’, which describes how “cars in the rain sat silent in rows / the entry track, like a spine up a back / or the ribs round a chest / ran uphill northwest”.

It feels like sacrilege to admit that the best songs on this album are actually the mournful, introspective slowies towards its end. It feels like an insult to all the ebullient up-tempo tracks on this and albums past. But each colour here is made richer by its complement, and ‘Beer in the Breakers’ and ‘Epping Forest’ are an unbearably rich blue. The titular track describes a found campfire, some beer-cans and a broken pair of sunglasses with elegiac solemnity. The scene is confined by plodding bass and drums that rise and fall in urgency like the wind: the tragic details are demarcated by voice, and by guitar solos that come out of nowhere and proceed for bars and bars and bars. “Someone had a temporary home here,” he sings, as if you stood beside him. “Someone drank beer in the breakers. / I hope they weren’t alone here.” Lest you forget, you’re still very much in it. But the tide is going out now, and the credits are going up. You’re left with some surprisingly dark emotions for a Wave Pictures album, and you’re not sure how to get dispel them.

Maybe a certain plain, bright chord would do it… Once more from the top?