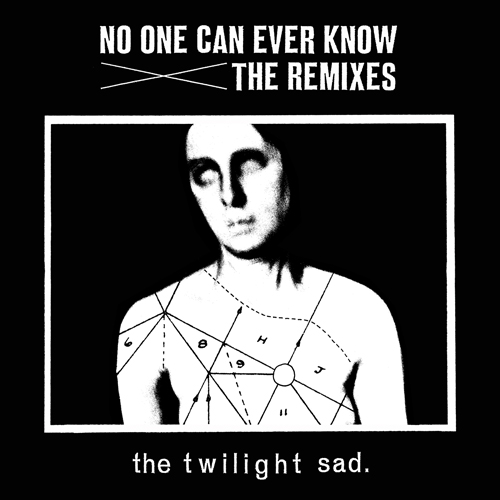 The Twilight Sad’s No One Can Ever Know was a disappointingly colourless affair which displayed only fleeting glimpses of the genius that, over the course of their previous two fantastic albums, had established the band as one of Britain’s best new acts. If the record was an attempt to revolutionise the band’s sound, it failed: for all the new elements the band incorporated – new wave synth, openly emotive lyrics, a more widescreen approach to production courtesy of Andrew Wetherall – No One sounded exactly like a Twilight Sad album, and ultimately felt like a case of one step forward, two steps back. While the band have arguably always traded in shades of black and white, No One felt dishearteningly grey.

The band have now invited several electronic musicians to attempt to add a splash of colour to their palette. The Remixes is not a track-for-track reimagining, taking in as it does only four of No One’s nine songs (‘Alphabet’, ‘Nil’, and ‘Not Sleeping’ all appear twice here; ‘Sick’ thrice), but instead aims for a less lofty target and allows the remixers – Com Truise, Liars, and Tom Furse of The Horrors among them – to choose their own weapons. It’s hard to say whether the limited range on show says anything other than that the four songs chosen are the most readily remixable from the album, but that The Remixes never becomes repetitive despite this is, on some small level, a success.

What is disappointing about The Remixes is that it feels likely to be of much more interest to fans of the mixers than the mixees. James Graham’s repressed drawl is the most immediate identifier of a Twilight Sad song, and here it is reappropriated for the purpose of atmosphere, rather than being the driver of the tracks. Little else remains of The Twilight Sad here, and it is something of a missed opportunity that the chance wasn’t taken to demonstrate what No One could have been had it been subsumed more completely by its electronic influences. That clearly was not the intention here, though as we move through an incoherent mix of mangled electronica and synth-heavy dubstep, it only becomes more disappointing that the piece lacks a uniting purpose.

This would be academic if the album itself was more than moderately listenable. The best moments come in the first half, with Brokenchord and Com Truise offering interesting takes on ‘Sick’ before Liars play ‘Nil’ through the filter of Year Zero-era Nine Inch Nails, complete with lengthy synthesised outro. The highlight is perhaps Tom Furse’s rendition of ‘Not Sleeping’, which takes Andy Macfarlane’s tense guitar line and makes it central to a seven-minute ambient breakdown. The latter half of The Remixes is unengaging and ephemeral. It is by no means so bad as to be unlistenable; it nevertheless does not make the album any easier to recommend.

The greatest moments in the Sad’s history mark themselves out as remix-proof, so tight is their construction and use of dynamics (would a remix of, say, ‘Cold Days from the Birdhouse’ do anything but diminish that track’s remarkable power?); that a whole disc of remixes is now even possible is demonstrative of where the band have changed over their short career so far. Having moved away from the slow-building evocative mood pieces of their debut toward a form of structured noise that is closer to their live shows, The Twilight Sad remain in a slow evolution. The Remixes is unlikely to be looked back on as a key part of the band’s discography, but it is a listenable, if ultimately superfluous, diversion.

Listen to No One Can Ever Know: The Remixes