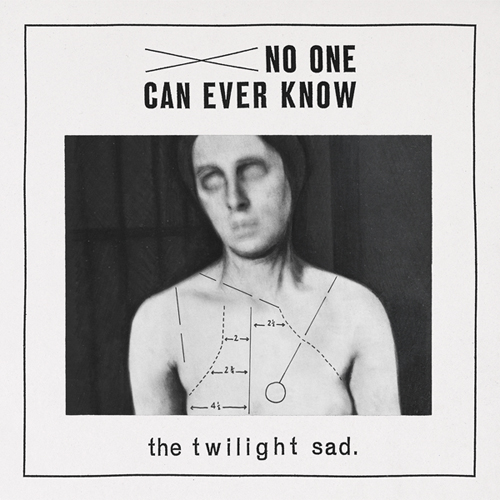 Reading the romantic poets is often lost upon people who have been told they ought to be familiar with Keats and Shelley. Between the relatively tame subject matter and the strict sensibility of it all, the romanticism passes them by.

I once watched James Graham play a show. I was working the bar in an old Presbyterian church. As the band stood up to preach their sermon, Graham reverse-prostrated himself and played the entire set lying on his back – an arrogant act of defiance and pride against God, in whose house he was playing.

Within the tight confines of The Twilight Sad’s previous records, the emotion was lost.

No One Can Ever Know is an entirely different affair. Bigger than ever, right from the first groan of the synth on opener ‘Alphabet’ to the very last strained chorus of ‘Kill It in the Morning’, the Scottish act wail their way through their third album.

“So sick to death of the sight now, it’s safe to say I never wanted you more” says Graham through a thick accent on the opening track. The Twilight Sad have always been about this torturous idea that they both hate and love in equal measures. This track is no exception as it moves its wall of sound increasingly quickly, increasingly near to your poor little face before eventually knocking you for six into track two ‘Dead City’, which gives you several seconds of dazed and confused respite at the start. But it’s not long before the band kick it back up into full swing with screaming synths and empty drumbeats.

‘Sick’ is like a warm hug from the otherwise death-knell-cold band. That said, it still also resembles a firmly regimented march through some industrial wasteland after the fallout of industry has left the city abandoned to crack addicts.

And this is exactly the feel of the whole album: the spectre of industry looming over every track more than anything they’ve put out in the past. Just listen to the middle tracks like ‘Don’t Move’ and ‘Nil’ which are in stark contrast to the relatively welcoming tracks on their previous releases such as ‘Cold Days from the Birdhouse’ on their debut Fourteen Autumns & Fifteen Winters.

All the early reviews of this album have quite rightly noted that this is an innovation and evolution for the already-promising band who never did conform to the standard critical pattern: a quality first album, a difficult second, a strained but nonetheless brilliant third.

This album is tight from start to finish, evoking the despair and binding hierarchy of 1980s Britain. All I can say is that I’m glad I’m not this band – lachrymose beyond belief in both the active and passive senses of the word.