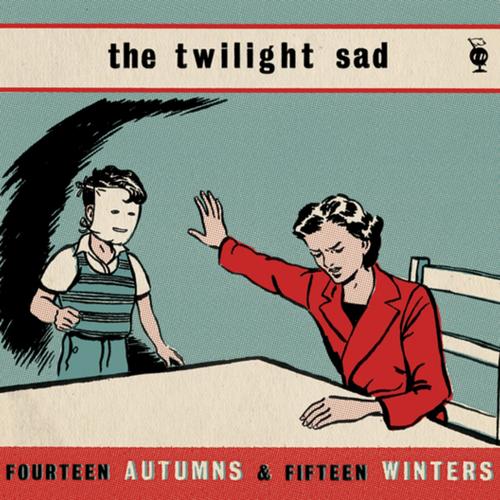 The debut album by The Twilight Sad doesn’t sound seven years old. Listening now, the opening creaks of “Cold Days From The Birdhouse” still sounds fresh, and when the façade of restraint collapses into the wall of noise it still gives me shivers despite having heard it hundreds of times. Most songs are dulled with familiarity but times has only uncoverd more subtleties to appreciate in this assured and special debut album. A deluxe re-issue for Record Store Day provides the perfect reason to give Fourteen Autumns & Fifteen Winters an overdue re-examination.

Fourteen Autumns is much more than the sum of its parts, what could potentially have been a pedestrian brew of overdriven guitars and twisted atmosphere (like some concoction of Arab Strap and The Jesus & Mary Chain) is brought to life and crafts a world all of its own. While they may be quite accurately bracketed as a shoegaze band, what sets The Twilight Sad apart is the fact that the force of their music, considerable as it is, isn’t derived purely from its volume. Any band can make a surly racket, but it’s the emotional intensity they have that makes the difference. I vividly remember watching The Twilight Sad live for the first time in 2008; it was incredibly loud, but by far the most captivating thing was actually how tranquil the centre of the storm was. James Graham stood forsaken centre stage; trance like – howling and crooning like there was nothing else in the world, and with such conviction that made me believe that might be the case. It’s a regular feature of their lives shows (they must ranks as one of the best live bands around right now) but they also translate that same level of intensity and complete immersion to heir recordings as well.

Most bands tend to erect a drip-feed of emotion through their songs, positioning themselves as some grand puppeteers of pathos constantly directing emotion, but here the drip has been torn away and there’s just a sluice; a constant onslaught of everything they have being poured out. There is no shelter to be found in these nine songs – listening basically demands giving yourself over to the exorcism. They’re a band with an ability to really get under your skin, with this sincerity paired with an eerie sense of something familiar in their music.

At the core of these songs is a kind of twisted suburban horror where Graham’s language positions mundane everyday details alongside macabre imagery and combined with his delivery it leaves a paralytic fear seeping from the album. On “Mapped By What Surrounded Them” he talks of walls filled with blame while crying “she’s cut herself with stain glass windows and she’s playing with her toy”. “Talking With Fireworks” is perhaps the best example, where the repeated line “does your fear not grow when you see that you’re all mine…with a knife in your chest” is either devastatingly violent or romantic – after all this time I’m still not entirely sure. Graham is happy to retain the mystique of his lyrics, never explaining the meaning behind them and it makes them all the more potent. To attribute their skill mainly to the vocals/lyrics is a disservice to the construction of the songs themselves, which are impeccably pitched. In particular Andy McFarlane’s walls of ringing guitar perfectly complement the tone and the wheezing accordion swells which have since been retired give the album a folky element which acts as a perfect foil for the noisy melodies.

The elements are all familiar but they create a sound which unlike anything else. The fact that they’ve not tried to recreate it – each album since has been a subtle evolution which distances it from this – makes it even more worth clinging to. It is in itself simply a passage – a darkly confusing and occasionally illuminating passage – much like the vagaries of early adolescence detailed in many of the songs.

This re-issue comes with some early demos and additional tracks, but these for the most part are curios rather than essential additions to your collection. The recording quality is rough, so the three which are simply earlier incarnations of album tracks (and a demo version of “3 Seconds of Dead Air” from the self-titled EP) offer little but a glimpse at their development. The previously unreleased tracks from that same time period are more interesting and they hint at the assuredness that was to come. More than anything that’s what the extras provide – an interesting bit of hindsight, listening to this early work it’s clear to hear there was always a spark of something special. It’s a particularly neat comparison considering their most recent notable activity was the release of their special performance with the Royal Scottish National Orchestra – it’s incredible to see how far they’ve come. Fourteen Autumns & Fifteen Winters is still their most fully realised work though. In an interview about the album James Graham stated that during recording someone suggested to him this album wouldn’t be fully appreciated until years after it came out…as the band’s stature continually grows and more people discover the album, it’s now starting to confirm its deserved status as a cult classic.