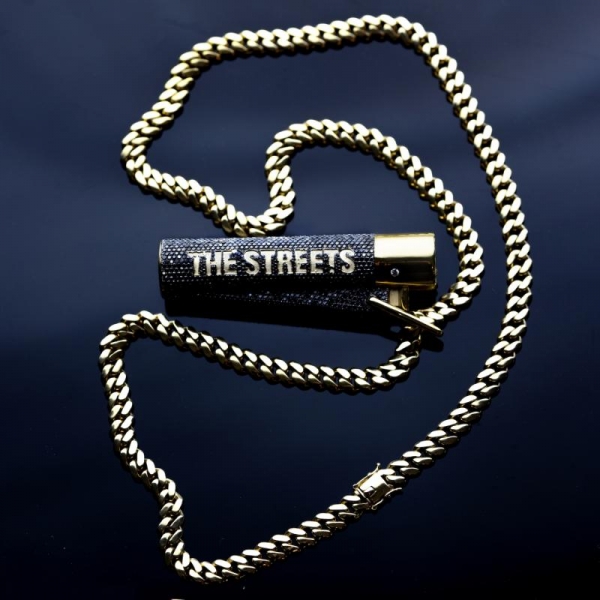 “It’s not a mixtape, it’s a duets album. So think of me like…Frank Sinatra”

Skinner’s trademark smirk, is still clearly very much in effect; his tongue never left his cheek. Call it what you will, the nomenclature certainly takes a little bit of pressure off Mike Skinner’s first Streets album - which is not strictly an album - since Computers and Blues nine years ago, one that he said he’d only make if he was "40 and broke".

Skinner, 41, is unlikely broke, given the sold out Streets reunion tour, and the fact that the omnipresent clipper lighter on the album cover, this time bejewelled, is a real life necklace. But the format certainly ups the difficulty: with each track featuring a different artist, from a wealth of genres. From Tame Impala to IDLES, via rapper-come-internet curio Jimothy Lacoste, it’s an exercise in flexibility, in collaboration and support of new, largely unknown talent. It speaks not of a stale money grab, but of a conscious desire to stretch and explore his talent, exploring outside of his comfort zone, and to make not just another Streets album.

The highlights include, and hold onto your hats: “None of Us Are Getting Out of This Life Alive (Ft. Idles)”, which sounds some way between Mark E Smith and Black Flag, “I Wish You Loved You As Much As You Love Him (Ft. Donae’O and Greentea Peng)”: a little slice of bassline sunshine. “Eskimo Ice (Ft. Kasien)”, which harks back to the golden age of Croydon dubstep with the estate town crier, his off kilter delivery a perfect marriage to the style’s wonky realism. And he shows he can still do The Streets thing on “The Poison I Take Hoping You Will Suffer (Ft. Oscar)” and “Conspiracy Freestyle (Ft.Rob Harvey)”

Genres come and go with collaborators, and with that high difficulty coefficient, it’s of course hard to always stick the landing. Skinner can’t be an easy man to collaborate with, not out of any kind of personal spikiness, but out of a musical and lyrical unpredictability. The vocals on “Phone Is Always In My Hand” seem somewhat out of place, like a brutalist landmark in a beauty spot, while Tame Impala’s airy voice on "Call My Phone Thinking I’m Doing Nothing Better" stand out, not unpleasant, but not coherent.

Still, it produces one of the standout lines on the album, a classic Streets anti-joke: “love isn’t a riddle / love isn’t made to be hard / you know I’d give you my kidney / but please don’t take my... charger”. The rhyme falls flat, it’s not his heart he’s worried about it’s constant connection to the network.

If a theme can be gleaned from such a disparate album, it seems to coalesce around the toxicity of the internet and its anxiety-inducing, romance killing influence. But alongside such young bedfellows, proceedings seem little jaded by age - sage pronouncements to a hungover teenager over the breakfast table “I don’t party hardly / but when I do I party hard”, he orates on “You Can’t Afford Me”, as the teen nods, and muses on how putting “in the work from 11-2” hardly qualifies, dad.

There’s nothing ‘old man’ about the album, however much Mike wants to compare himself to Frank Sinatra. An old man would live on past glories, weaving yarns down the pub, doing his best Streets circa 2001 impression as the clock ticks past 50 and onwards. It’s clear that there’s still a creative spark within Mike Skinner, and he’s not afraid to risk his reputation to make it burn. If The Streets project is to continue, it’s clearly going to be as a living breathing project, not a museum exhibit. That in itself makea None Of Us Are Getting Out Of This Life Alive a worthy addition to the Streets legacy.