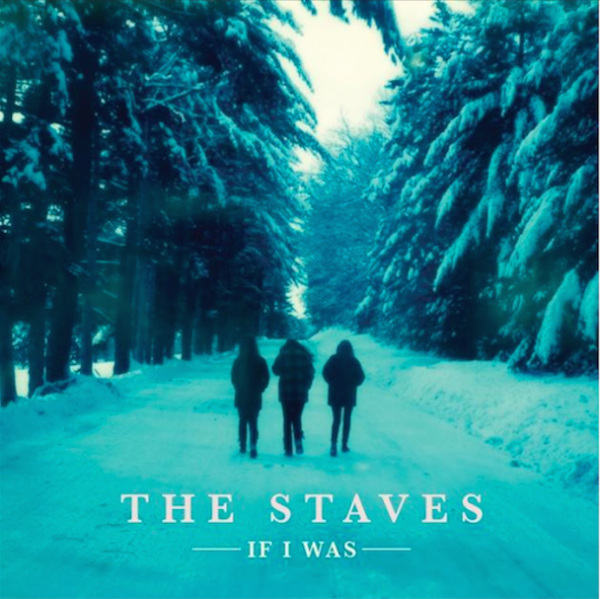 Rejoice, for spring is here and The Staves have arrived squinting and blinking in the light after two and half years in hibernation. After much touring and no time recording, the trio have nurtured their second album under the paternal tutelage of Bon Iver’s Justin Vernon. Squirreled away in his Wisconsin live-in April Base Studios, Jessica, Emily and Camilla Stavely-Taylor have worked on the written material they gathered while on the road, and shaped it with Vernon’s crew of wintry helpers.

When The Staves are criticised it is never for their singing or musical talent, but for the lack of variety three-part harmony driven music affords. Folk songs are easily targeted for their simplicity, even when it is that simplicity which best showcases vocal ability. Therefore while Dead & Born & Grown was an undoubted success at the time, it was still to be proven whether there were more, equally fulfilling albums to come from the Watford trio.

On the charge of similarity, If I Was is as guiltless as it could be without losing what makes them successful. A whole host of hitherto-unlikely Staves-related instruments are added to the mix, including synthesisers and snappy drums to add a punch to their often cute and cuddly aura. When combined with some dare we say at times bitter lyricism, there is definitely more bite here to fend off critics. If indeed placating anyone was part of the plan, which is unlikely going by promotional interviews and a ‘making of...’ trailer where the emphasis is on pushing their musical and personal boundaries while having “fun”.

Having said that there are one or two self-conscious moments that look back over the shoulder and glance at the listener to make sure everything is going as well as they hope. The sweetness of their voices crosses the line into sickly as if to say ‘we know we sound too nice sometimes’ and lyrics like “I’m sick of your singing/ my voice isn’t silver to you now” (remember ‘Gone Tomorrow’ from their debut) or “can you hear where we’re coming from?” suggest a knowing wink over the microphone. Even the title appears to have one eye on the past.

You’d be forgiven for wondering where the joy was in some of the bleaker lyrics, “suffer me as I suffer you” or “on and on/ even the good die young”. There is a clear penchant for melancholia which moves into elegy on a song like “The Shining” (another happy topic) but quite a lot of the time the lyrics are either carefully ambiguous or juxtaposed by some intricate harmony that is everything but sad. The line “cut my roots and now my leaves are dead” harks back to the first album’s references to Nature and Her cycles. Suffering and dying are part of life. This might sound a bit wet looking back at 2012, however If I Was contains counterbalancing tracks like ‘Black and White’ and ‘Damn It All’ belligerently placed in everyday life, often spurning a man or modern society and all the fresher for it. Their voices are beautiful. It is known. The complexity in the arrangements of some of the harmonies on this record show them off individually and their obvious synergy as sisters.

The addition of fuzzed electric guitars, rockier drums and an abundance of strings and horns make this release feel a lot meatier sonically as well as verbally. A heavier crash to the drums on ‘Black and White’ is a change-up that isn’t overused, while the rat-a-tat-tat on ‘Make It Holy’ adds another surprising bridge between sections. This song is made all the more vivid by the addition of Justin Vernon himself as he rumbles away in crossed and joined harmonies with the girls. He waits until track 11, probably aware of his already substantial contribution to the production of the album and thus not making too clunky an impression.

If I Was takes up a number of perspectives as each of the sisters separate themselves slightly from the others, only to come back together again. It’s a celebratory sound, even if some of the images are dark or lonely, out of the darkness comes the light. Out of the snows of Wisconsin come a more mature set of musicians, battling demons but laughing merrily as they go, drinking beer and befriending one of the biggest producers around today. It is not the holier than thou picture that was prevalent in Dead & Born & Grown, and their own passion for nature is an apt metaphor as they blossom into an act with two albums to tour, with the second set to sound very different to the studio thanks to the imbalance in budget. Whether the self-reflexive streak in their music is a sign of nervousness or confidence, it is on the whole, largely unnecessary for them to worry, especially not about this LP.