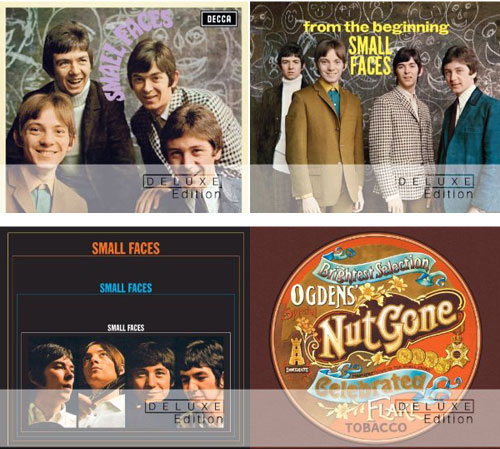 For a band whose original lineup’s recorded output only spanned four years, The Small Faces managed to leave behind an impressively rich and diverse discography. Now, the band’s Small Faces (Decca, 1966), From the Beginning, Small Faces (Immediate, 1967), and Ogdens’ Nut Gone Flake are being re-released by Universal Music. When listened to in chronological order, these four albums tell the story of a band whose output remained remarkably consistent and enjoyable even as its sound changed with the times, from stomping R’n’B covers to tripped out psychedelic rock.

Like The Stones, The Who, and countless other British rock bands of the 1960s, The Small Faces started out playing a loose, raw form of R’n’B. Their self-titled 1966 debut album on Decca is proof that they might have been doing it better than anyone else. Mixing covers of American R’n’B and their own originals, The Small Faces rip through song after song. Later on the band would give more room to Steve Marriott’s guitar, but here Ian McLagan’s organ is more prominently featured. Marriott’s strong soulful vocals have an awesomely hot, live feeling and the rhythm section of Ronnie Lane and Kenney Jones is locked in throughout. Jones in particular is impressive; his drumming is energetic and his unexpected fills keep the songs feeling fresh even as the band stretches them out. The opening cover of Sam Cooke’s ‘Shake’ is a highlight as is the wild, poppy ‘Sha La La La Lee’ penned by Kenny Lynch and Mort Shuman. This is ’60s garage rock at its best with all the energy of the band’s counterparts across the ocean, but anchored by a level of songwriting and musical competence that the Americans couldn’t rival.

1967 saw the band leave Decca for Immediate and the result was two competing albums. Decca rushed to release From the Beginning, which hit stores only two weeks before Immediate’s (confusingly titled) Small Faces. Both albums find the band in transition from garage rock towards a slightly more druggy, experimental sound. The R’n’B influence is still strong on songs like their covers of ‘Runaway,’ ‘Baby Don’t You Do It’, and a terrific version of ‘You’ve Really Got a Hold on Me’ (all three off From the Beginning). The trippy ‘Yesterday, Today and Tomorrow’ (From the Beginning), ‘Green Circles’ (Small Faces), and the stoner anthem which was the band’s only US hit, ‘Itchycoo Park’ (Small Faces) see them flirting with psychedelia. On Small Faces’ ‘I’m Only Dreaming’, which plays with soft/loud dynamics to great effect before finishing with a flourish of sax and soul shouting, the band put the two styles together. Overall, a slightly fuller, cleaner sound and the inclusion of ‘Itchycoo Park’, the band’s most memorable composition, makes Immediate’s Small Faces the slightly stronger album, but each is thoroughly enjoyable and totally of a piece with the other.

That flirtation with psychedelia came to fruition on 1968’s Ogdens’ Nut Gone Flake, which many consider the band’s masterpiece. The album plays like a response to Sgt. Pepper’s revolutionary sound. The tone is set from the beginning with a spacey instrumental opener, while the music hall-influenced ‘Rene’ and ‘Lazy Sunday’ sit comfortably next to the hard rocking ‘Afterglow of Your Love’ and ‘Song of a Baker’. The b-side is loosely based around the fantastical story of a boy named Happiness Stan, who sets out to find the “missing half” of the moon, on an Alice in Wonderland-like psychedelic trip. Narration from actor Stanley Unwin (the inventor of “gobbledegook”) is interspersed between the songs which distracts a bit from the music. That’s a shame because the b-side is as varied and out there as The Small Faces ever got, particularly on the twisting, shambolic ‘The Hungry Intruder’ and the doped up R’n’B of ‘The Journey’. Ogdens’ Nut Gone Flake is certainly the band’s most ambitious album but for my money the band was at its best when it was tearing through simple R’n’B numbers.

In reissuing these albums, Universal have given The Small Faces fan an overwhelming bounty of alternate mixes (including stereo mixes for each album), alternate versions and b-sides. The first three albums get the double-album treatment while Ogden’s Nut Gone Flake gets three discs (and includes a previously unheard track, the groovy instrumental, ‘Kamikhazi’). Each album is packaged with rare photos, and liner notes by rock journalist Mark Paytress, including interviews with McLagan and Jones, the two surviving members. Universal have done a great job with these reissues. They’re a fine way to get to know a band that maybe isn’t as well known as it should be (at least Stateside), as well as providing the definitive reissues for completists.