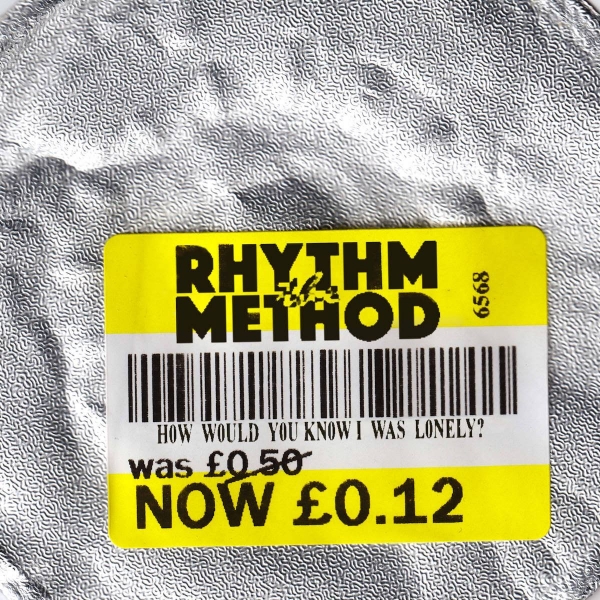 There’s been a whole raft of artists that have found inspiration in the weekend. The Cure, Bay City Rollers…Hard-Fi. It’s easy to see why.

There’s a palpable excitement that hits when 5pm on a Friday hits. Group chats are bombarded with messages. Plans made. Outfits laid out in preparation. Beer gardens filled. Someone gets elected to buy the Sky Box Office pass (or find a way around it). Arguments erupt about whether you’re getting a JustEat or splashing out on Deliveroo.

Or you just binge watch that show that everyone at work’s been telling you to watch as you tiptoe around spoilers. It’s either a two day bacchanal or a two day nap. There’s rarely an in-between.
The Rhythm Method, as documented in their long-awaited debut How Would You Know I Was Lonely?, are clearly participants in the former. Joey Bradbury and Rowan Martin are very much of the “living for the weekend” generation, but they prefer to capture the side that doesn’t make it into those “What did you get up to this weekend?” conversations.

Following Joey’s laddish alter-ego through an average weekend, including a regular trip to the barbers, they paint a story of joy and of anguish, because life is rarely just one or the other. For The Rhythm Method, life is both beautiful and cruel.

Whether it’s nostalgia for the easy days when all you were bothered about was sex (“Sex In The Suburbs”) or finding yourself at a party, woefully single, and surrounded by people who want to talk politics (“Single Life”), the duo deal in such a specific restlessness that could be alienating to some. But for those of this alienated generation of twentysomethings just trying to scrape by, it’s incredibly evocative.

As he quips about The Horniman Museum or the Kingston parakeets, Bradbury isn’t concerned with losing you in his esoteric references, because that’s just how he talks. It’s a kitchen sink malaise that feels real. Funny, as conversations tend to be, but with an undercurrent of despondency.

It’s clear that The Rhythm Method love the esoteric and it blends into their music too, creating a sound that’s sometimes awkward, but always magic. Bradbury’s half-spoken average Joe(y) delivery almost sounds like someone who can’t be arsed, while Martin is often doing a very good impression of someone doing Pet Shop Boys at karaoke.

The 808 State-esque intro leading into the bouncy UKG/late-'90s Europop of “Continental Breakfast” is such an intense hit of chaos, and they must be the only modern day pop band that not only loves Squeeze but has a founding member guest on their album (the brilliant closer “Wandsworth Common”). None of it should work, but it does.

All of it does really. It’s like merging the humdrum with the sublime to see what happens. It’s nostalgia bottled; those half-remembered songs you heard on the radio as a kid all seeping into one another. Skipping around a radio and catching snippets. The Rhythm Method don’t want to sound like one thing, they want to sound like everything. Not to try and please everyone but because that’s where they find the most joy; in that space between ebullience and melancholy.

How Would You Know I Was Lonely? is an album completely devoid of pretence. They’ll reference taking a girl to Spoons if they want. They’ll dig into their record bags and pull out Steely Dan or Squeeze without any shame. You might want to raise your eyebrows, but nothing here is done insincerely. There’s an earnestness to The Rhythm Method, in amongst all the wordplay and knowing winks.

It’s a record of real longing and trying to find yourself among the rigid structures of late capitalism. It’s not deep but, like a drunken chat in the smoking area or on the night bus home with a kebab, it’s funny, honest and prone to weird but memorable tangents.