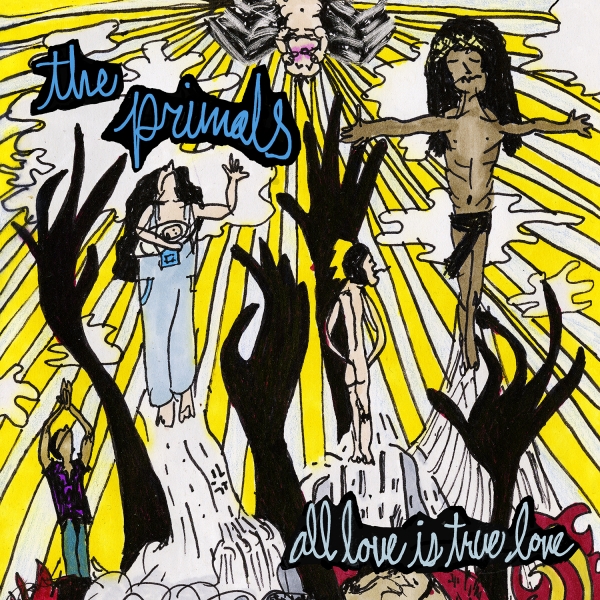 Primal: relating to an early stage in evolutionary development. So yeah, that just about sums up The Primals and their debut LP, All Love Is True Love. The Los Angeles trio - vocalist/guitarist John Henry, bassist Chad Fjerstad, and drummer Andrew Black - play ’90s alt-rock that resembles the Toadies if Vaden Todd Lewis had studied Scream instead of Mudhoney.

The songs are seemingly written to be disorienting, either from seasick lurching (“I’m Coming Home”), herky-jerky motion (“It’s Personal”), or both (“Hello Cruel World”). Elsewhere, sometimes the band simply barrels along until you’re exhausted, as on “Dead Predators” and “Together Whenever”. The record’s slower tunes—“Pity City” and “Save Me, Baby”— thankfully allow some (minor) reprieve from the convulsions. They also have two of the strongest melodies here, and the latter, along with “Fortune & Sons,” has Henry’s best vocal of the set.

Speaking of, Henry steals the show here by dividing his time between singing and screaming. Henry’s favorite trick is to intertwine his voice with the guitar, strengthening both as a result. He expertly rides the tumult of “Another World To Call Your Own” just as well as he aches with “Save Me”. His lyrics, meanwhile, match The Primals’ lizard-brain rocking with stream-of-consciousness (“Can you see what I’ve seen?/ Or tell a soul from a dream?/ Anyways, it’s like a knife that cuts you twice/ Or was it once?/ Now I forget”) and a bit of nihilism (“I’ve been fooled but it’s something to do/ Don’t know why I try”).

All Love, then, is a promising debut, despite the band playing it safe for much of the runtime. The one exception is album closer “I’m Coming Home,” which functions more like a three act play than a song. It’s a bit odd, and a bit out of place. It also demonstrates that these guys have more to offer on future outings.