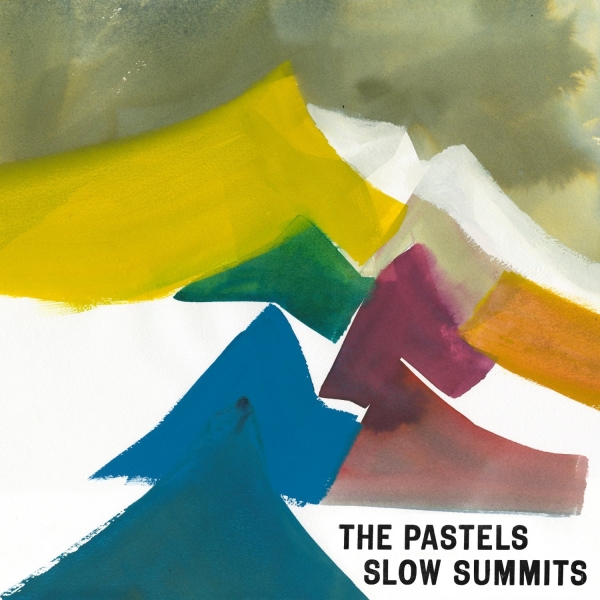 The 1980s is a decade which most remember as tied up with the monstrous Thatcher-Reagan office, decadent electro, rampant consumerism and unfortunate hairstyles. An actual handful of people will remember it for C86: The sub-genre born from indie to become guitar music’s wimpier, NHS bespectacled sibling. Emblematic of this movement were The Pastels, a Glaswegian ensemble led by Stephen McRobbie with a neat line in sweetly wry jangle pop. Returning 31 years after forming with their fifth full length release, it’s clear they are ready to slot back into their cosy niche.

Slow Summits is an album where even the title is smattered with self deprecation, reflecting a band who never appeared to be in a rush to reach the lofty heights of fame and success afforded to their indie counterparts but certainly awarded ample recognition in the circles they quietly move in. Here is a body of work that quietly illustrates- rather than shouts about- why that is. It’s in the soft, effortless vocals of Katrina Mitchell on ‘Secret Music’, a tale of unspoken affection. It can be felt in the curious nostalgia weaved through the strings and lilting harmonies of ‘After Image’. It is poignantly evident in the all out romance of ‘Kicking Leaves’ and the adoring memory “There’s a drawing of you with your eyelashes black on your cheek/You’re asleep” and is even found in the playful bounce of single ‘Check My Heart’. It’s not cinematic or grandiose but it’s much more real than that and therefore much more interesting – the soundtrack to a glorious mess of a life, not a movie.

Slow Summits is, forgive the clumsiness, a very British album, bound up in earthly passions and waxing lyrical in unmistakable Scottish tongue about the beauty of seemingly banal reality and the value in the anti-ostentatious. They may have been around long enough to develop an easy cynicism but they haven’t lost their wide eyed affection, dry twist on a phrase or their love affair with lo fi. At nine songs it is a slight but irrefutably charming record, full of deconstructed pop to absolutely dote on, as has always been their speciality. Though it has been sixteen years since their last studio album, not much is technically new here except a further tendency towards the mellow and ongoing hopeless romanticism.

The Pastels possess a hushed and humble kind of gorgeousness, they’ll forever be just on the outside of the hipster zeitgeist and that’s just fine, because who do they need to impress? Never household names, nor major festival headliners, The Pastels are The Pastels and have already claimed the fans they’re going to. They’re a band’s band loved by everyone from Sonic Youth to Kurt Cobain to your forever inward, blushing, 30-something neighbour, trapped in the spirit of awkward adolescence with a vice-like grip on his Creation Records collection.

Back on their 1997 album Illumination, Stephen McRobbie sang “I’ve been thinking
we never had much luck”. Whether or not he’s referring to their status as perpetual favourites of an exclusively cult crowd, we’re not sure. Well, it’s not like it’s about to change but judging by Slow Summits, we’re sure if it did, it wouldn’t make for half as graceful a climb.