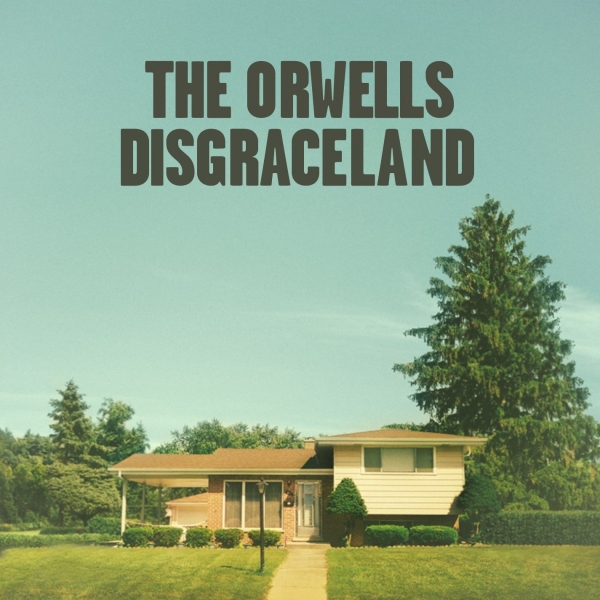 At the midpoint of “Always and Forever”, a characteristically half-charming/half-shambolic fuzz pop number from Illinois quintet The Orwell’s sophomore full-length, Disgraceland, singer Mario Cuomo pauses to share the spotlight with the piped-in sound of a revving motor. The quick sampling of All American noise is something of a synecdoche for the album at large, a quick, rumbly metaphor for the ways in which Disgraceland plays fast and loose with the variable Americana of sixty years of stateside rock, punk, indie, blues, and soul.

The title even attempts a pun on a classic album from one of the United States’ three or four best songwriters, though it’s anyone’s guess what the band’s point is in that wordplay, besides perhaps some acknowledgement of the problematic, false-utopian (who knew false utopia’s better than Orwell?) nature of the suburbs depicted on the album’s cover. In general, The Orwells deal in archetypes; indeed, count how many records you can think of with that dramatic motorcycle purr, and assume there are at least a hundred more you’re forgetting. The album is a mélange of garage, roller-rink, and bedroom noisiness, layered with a patina of tongue-in-cheek irony. As such, the extent to which you respond to The Orwells depends on your taste for records that obsess over Hootenany with twice the eye-rolling, that stomp through Nuggets (“Gotta Get Down”) and Big Star (“Norman”) and Thin Lizzy (“Who Needs You”) with air quotes firmly in place. It’s an album that displays great faith in the late 70s/early 80s nexus of bar rock, punk, and 50s nostalgia, meaning that its melodies, riffs, and aesthetic choices often charm (to a point), even as its narratives mystify.

“Southern Comfort,” the album’s opening track, supplies a salient example of the mixed-bag nature of Disgraceland, a song whose sharp melodies are wasted on the trite. At one point, Cuomo offers “I can’t walk, and I can’t dance / So gimme a smile and take off your pants.” If The Orwells are trying to be funny, they’re wide of the mark; but the lyrics of “Southern Comfort” are also too obtuse to be satire. No—lines like these lyrics are more like placeholders. In that sense, The Orwells are following a six decade tradition – indeed, this all more or less started with Buddy Holly singing “Peggy Sue, Peggy Sue, Pretty, pretty, pretty, pretty, Peggy Sue, Oh, Peggy, my Peggy Sue”, or the Ramones admitting “Second verse, same as the first.” Perhaps not coincidentally, “Southern Comfort” is at its best when its most central objects are a springy guitar riff and Cuomo simply singing, free of words, letting an “Ah ah ah” melody descend in effortless catchiness. The words get in the way, even as they beg not to be paid attention to.

Cuomo offers his best Glenn Danzig impression on second track “The Righteous One,” a nervy punk song built from gloomy minor keys, a Sonics-esque 1-2-3 guitar riff, and some echo-drenched melody. Like “Always and Forever,” there is a basic, undeniable thrill in the song’s quiet/loud dynamics, in the way it punches into choruses and sulks in B-movie spookiness during verses. But like “Southern Comfort,” The Orwells seem to be asking us to mainly source our pleasure from those dynamics and riffs, as entire stanzas are built out of lines like “Double double double double double double double dare falling down the stairs.” But then that chorus lands again, a Nirvana-sized tidal wave beneath which all is forgiven.

The gloaming, atonal guitar that bursts in shards at the beginning of “Dirty Sheets” does similar yeoman’s work in keeping the song’s swinging, SST-indebted post-punk compelling through lines like “From the East Coast to the West / We ain’t the worse, we ain’t the best / Drink all night, I’m such a mess / There’s something missing in my chest.” The song’s noisiness, the relative weirdness of its clangorous guitars for a tune that is more or less your typical blues-rock jukebox filler (there’s a later song here called “Bathroom Tile Blues;” my guess is you likely know the entirety of this song’s concerns) gives us a glimpse at The Orwells’ gift for deconstruction, the ways in which the band can excel at taking apart American rock clichés and making them uncanny and dangerous. But, like much of the album, that post-modernism is deeply at odds with lyrics that make concepts like “drinking” and “partying” feel bafflingly inert, the most monochrome of boilerplate.

Elsewhere “Gotta Get Down” and “Who Needs You” benefit from ostensibly operating as inoffensive, footloose major key garage punk, songs that breeze by like fair weather and don’t ask for much more than tapped feet. “Who Needs You” is especially refreshing for the ways in which it finds The Orwells simply digging in with gusto, doing their best Replacements impression by letting their ragged, acid-washed guitar pop do the leading. One might even sense a subtle “Bastards of Young” homage in lines like “Listen up forefathers / I’m not your son,” not dissimilar from Paul Westerberg’s famous enunciation of Reagan-era directionlessness: “We aren’t the sons of no one / Bastards of young.” In fact, “Who Needs You,” despite being slightly obvious in its rebel-rousing dig at blinkered patriotism, also offers a nice solution to The Orwells’ duller lyrical concerns by thinking less about partying and more about resisting. Either way, “Who Needs You” certainly provides the albums’ best bit of sugar-rushed retro punk. In some sense, it might be unfair to expect lucid narratives from a band whose aesthetic is mainly derived from soaking Buzzcocks and Strokes records in spiked Mountain Dew. Yet the album’s best moments underline what The Orwells’ have to offer when they keep the sound, but also let us in on what they might have to say with it.