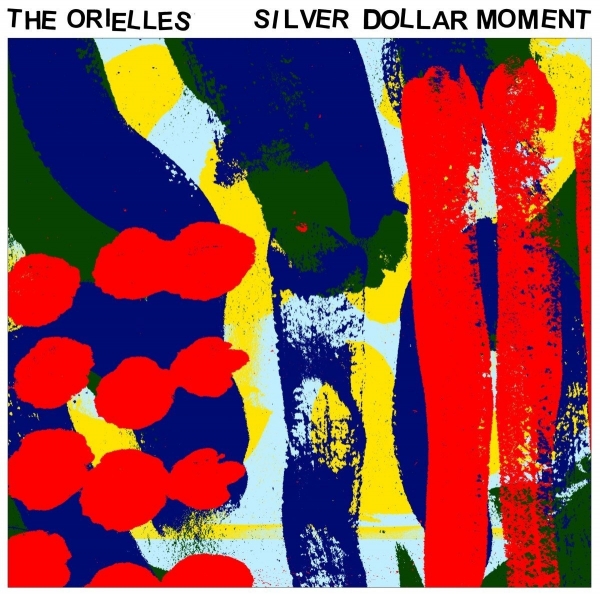 Nothing about The Orielles is all that ordinary. Just when you think you understand the Halifax trio, they throw a curveball your way.

Take how they met. Sisters Esme and Sidonie met Henry at a house party. So far, so every other band ever. But this party wasn’t all sex, drugs and rock ’n’ roll; it was the 40th birthday party of their parents’ friend.

Musically, they’re full of surprises too. Our first introduction to the band, “Sugar Tastes Like Salt”, was a sprawling eight-minute barnstormer that felt like at least four songs had been crammed into one. There were yips, yaps, extended, bruising guitar solos and flashy disco vibes galore.

It makes total sense, then, that The Orielles decided to call their debut album, Silver Dollar Moment. Inspired by a gig in Toronto that had the potential to go terribly wrong, but ending up being the best gig the band had ever played, it means when something unexpectedly falls into place. And that’s exactly what the album is all about.

This is 45 minutes of the purest indie pop; an idiosyncratic traipse through their expansive musical vocabulary. From the C86 jangle pop meets Pink Floyd psychedelic freak-out of “Let Your Dogtooth Grow” to the noodling jazz of “The Sound of Liminal Spaces”, you’re rarely waiting to be hooked by something fresh and catchy. There’s a touch of The Pastels, a bit of Belly and a lot of Orange Juice’s fun-packed soul.

Silver Dollar Moment rattles along at a breakneck pace, which is why when things tend to slow down, the cracks do show a little. “Liminal Spaces”, a woozy country-esque ballad, feels a little rote, while “Henry’s Pocket”, were it not for the improv flute solo towards the track’s end, feels something of a missed trick.

Luckily, though, Silver Dollar Moment more often than not surprises by leaning in to its strangeness. Whether you’re trying to figure out what the hell these songs are about (Is the rollocking “I Only Bought It For The Bottle” really just about buying a beer because it had a nice label?), or just losing yourself in the beautiful Lush-like dream pop of “Borrachero Tree”, it’s an album that pulls you in time and time again to see what else you can discover.

Like that formative gig in Toronto, Silver Dollar Moment is as carefree as can be. The skipped half-beat in “Blue Suitcase (Disco Wrist)” feels at once like a mistake and totally deliberate. But here they're not just flying along on a wing and a prayer. This really is just a trio of mates having a bloody good time celebrating their heroes while making something dazzlingly new. The Orielles’ story begins here and, if the rest of the book is anything like Silver Dollar Moment, it’ll absolutely be one worth keeping an eye on.