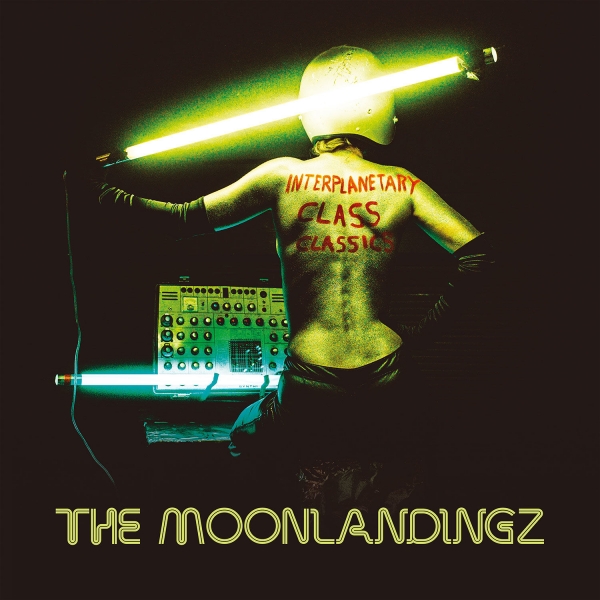 On “Black Hanz”, the undisputable jewel in the crown of Interplanetary Class Classics, Johnny Rocket launches into the first verse with a phrase that perfectly encapsulates the essence of The Moonlandingz project: “Tomorrow’s World was such a relief, yeah; you didn’t have to prove everything you believed.” For what is this album, really, other than a thrillingly daft and ambitious exercise in sheer self-belief, framed within a purely speculative vision of a future from the perspective of a past which never truly existed?

You’ve probably heard the schtick by now. The idea of The Moonlandingz originated in The Eccentronic Research Council’s 2015 concept album, Johnny Rocket, Narcissist And Music Machine… I’m Your Biggest Fan. Since then, the “fictional band” has been made flesh, featuring the ERC’s Adrian Flanagan and Dean Honer alongside the Fat White Family’s Lias Saoudi and Saul Adamczewski, with Saoudi “cast” as the superlative frontman, Johnny Rocket. The aural result of this somewhat unlikely combination (Sheffield-based concept-heavy electro duo meet South London filth-punk degenerates) is a maximalist monolith of an LP, dripping with glinting hooks, ludicrously camp glam-rock references and an infectious, swashbucklingly silly spirit.

The key characteristic which the Eccentronic Research Council and the Fat White Family have in common is commitment – the ERC to weighty concepts, the Fat Whites to provocation and a certain performative hedonism - and as such it is this record’s primal dedication to its central conceit which provides its lasting power. One cannot half-arse such a work of glammy, synth-driven retrofuturism and get away with it, as the monotonous, nostalgia-milking likes of Temples unwittingly demonstrate. The fact that Interplanetary Class Classics is as tight and well-crafted a pop-rock album as you’re likely to hear this year is kind of irrelevant; to vaguely paraphrase Kim Gordon, this record rewards its audience by completely believing in itself for its duration. There’s no shame or reticence here – The Moonlandingz have decided that they’re going to make 1975’s great unmade futuristic glam-rock LP in 2017, and nothing’s going to stop them doing that.

Of course, it helps that every single track is so punchy, each arrangement so full and ornately detailed. The record is anchored by Flanagan and Honer’s characteristic synthscapes, whose scale and portent would intrude upon the apocalyptically melodramatic were it not for Saoudi’s feral magnetism. As he does with the Fat Whites, Saoudi here displays an innate talent for providing even the loosest, most abstract compositions with a focal point, reminding the listener that we are being presented with a rock show, not a sound design experiment. Frontmen, in the traditional sense, are something of a dying breed, and to a certain extent that’s no bad thing – how many more people can recycle the libidinous exhibitionism of Jagger, Plant et al and truly hit upon something newly and equally alluring? Yet Saoudi, with or without the persona of Johnny Rocket, emits such charisma and conviction from every orifice that one forgets his forbears (not to mention most of his contemporaries) and can focus only upon him.

Interplanetary Class Classics isn’t a perfect album: there’s not a great deal of light and shade to be found, and although the brute force of their collective character and their apparent ability to simply pluck enormous hooks out of the air carries them gallantly through the running time of this LP, you’re pretty exhausted by the end of “No Cities Undone”. Yet that doesn’t really feel like the point. As beguiling as they are, the kitschy mischief of The Moonlandingz has led them to make a record of brilliant artifice rather than long-term emotional resonance or, perhaps thankfully, anything that could be mistaken for “authenticity”. Nevertheless, their debut packs a far mightier punch than the output of almost any other contemporary group with whom they may share certain influences; not bad for a fictitious band, really.