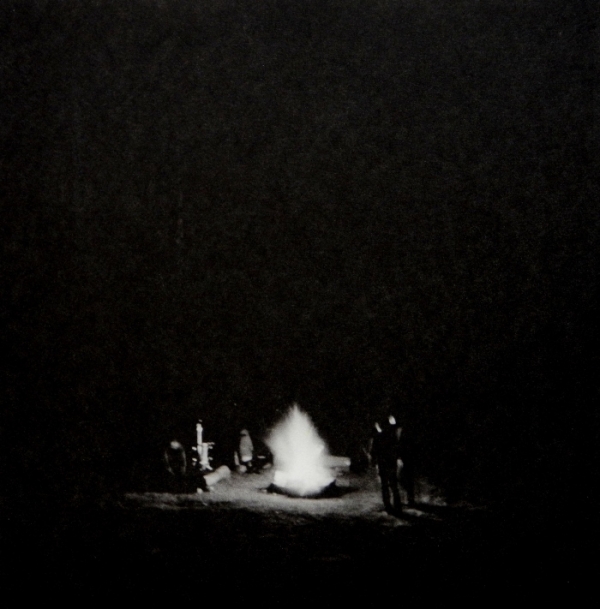 It’s not a new thing to turn to nature for the purpose of creative self-discovery. Bob Dylan did it 1967 with The Band around the time of Big Pink, and of course Justin Vernon went to similarly isolated extremes as Bon Iver when he spent the winter alone in his dad’s cabin to record For Emma Forever Ago. But perhaps more surprisingly, the formerly rather raucous Brooklyn quintet The Men adopted a similar approach when they hauled themselves up to the Catskills, NY to make their highly praised New Moon album earlier this year.

The record signalled a new evolution of the ever-versatile band, moving away from hardcore, noisy 70s punk and Sonic Youth influences toward a new, country-tinged AOR that was all their own. Recorded during the sessions for that record, The Men’s latest EP Campfire Songs is even more uncharacteristic – a fully acoustic collection of takes from New Moon and a couple of new songs, recorded around, you guessed it, a campfire.

In just five tracks, The Men astutely demonstrate just why so many artists abandon tough city-living to find a new creative voice: though the most throwaway record in their canon in many senses, Campfire Songs admirably continues along their new musical direction and beckons you to head to Vermont wearing a wooly jumper, with all ingredients needed for S’mores in tow.

With the crackling fire in the centre, the EP features full instrumentation via tinny acoustic guitars, harmonicas and lap steel to give you that warm, cosy, rural country retreat vibe we city-dwellers long for. The laid-back alternative versions of ‘I Saw Her Face’ and ‘Turn Your Colour’ channel Tom Petty and Neil Young & Crazy Horse’s more placid sensibilities, with a raw, natural, unassuming sound of a group of friends just hanging around, jamming. You know, just making tunes, in the woods. NBD.

‘Turn Your Colour’ and ‘Patience’are proprietary to Campfire Songs, and at six minutes long each, showcase the guys having fun with shakers, claves, ratchets and their guitars to produce an experimental jam-like drone. Stripped down, bare and rural, the whole thing displays a lackadaisical approach to music that all artists should adopt at least once in their career. Fresh air, mountains, and clear eyes can do anyone good, it seems.