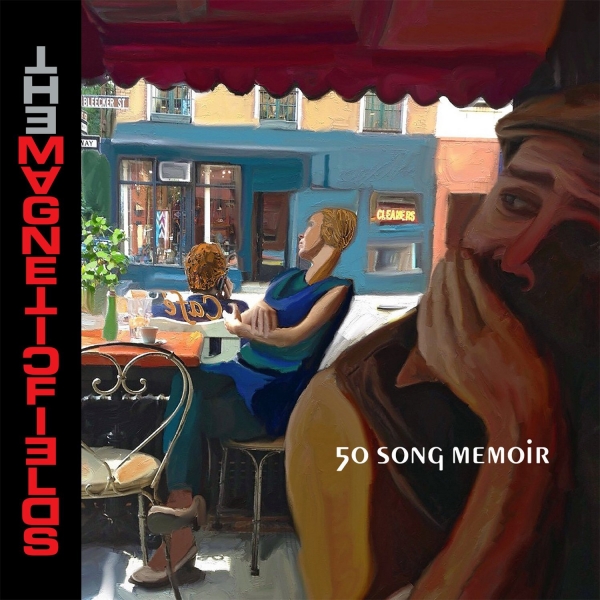 Stephin Merritt’s songwriting character and, by extension, his career has been defined not by his instrumental inventiveness and ear for a melody, though both are hugely impressive, but more by his default status of detached humour; a distance from emotion, perhaps, caused (or facilitated) by an incredible talent for irony and wordplay.

On his masterpiece 69 Love Songs (particularly with the unbearably moving "Busby Berkely Dreams") Merritt caused us to wonder, take time to consider what was below the surface of his cynical smirk, his winking gestures and punning playfulness. On 50 Song Memoir he appears to promise something like the truth - a brand new song dedicated to and descriptive of each year of his life right through to 2015. It’s a gargantuan undertaking and, of course, much less is revealed of Merritt than inquisitive fans might want, yet the record does manage to disarm with its blend of classic comic nihilism and the kind of confessionals that have the power to bring you up short, stunned and staring at the songsmith laid bare - if only for a moment.

Merritt has taken this personal project very personally indeed, dispensing of regular Fields co-vocalists Claudia Gonson and Miss Shirley Simms and turning his hand to a wide variety of instrumentation unrestricted by the self-policed rules the “no-synth” trilogy that preceded 2012’s majestic Love at the Bottom of the Sea. It’s also co-produced by Merritt, who has clearly taken this bold and potentially ludicrous idea, locked himself in a room with it and - seemingly free of the distraction of collaboration - has demanded from himself a huge and definitive work.

At times he delivers just that.

From opener "Wonder Where I’m From" we’re cocooned in Merritt’s singular Sondheim-sound world. “I was made in America, three cheers” he drily notes over a mandolin strum before launching into the meat of the first of the five discs with a disparate array of brief, baritone tunes like the karma-baiting samba of "Come Back as a Cockroach" or the bedsit disco of the hippie-mashing ‘My Mama Ain’t’ contrasted with the maudlin likes of ‘They’re Killing Children’ and melancholic reminiscence ‘It Could Have Been Paradise’ (“I sat around in rooms as quiet as tombs / It was heaven” he notes of his childhood).

The highlight here on disc one is 1974’s dedication "No", which consists of a barrage of hopeful questions that all share the same titular, tragically hilarious answer. It’s a smart deconstruction of both religious music and protest song that indicates to us that Merritt is on fine, cruel form - but it’s more like business as usual than anything that suggests a bold break into fresh territory.

The whole project peaks and dips as anyone would expect from such an unwieldy beast, yet it's always at the very least melodically memorable, lyrically light-footed and instrumentally fairly mental. There are a fair number of throwaways - much of disc two for instance is preoccupied with Merritt’s early disco days and as a result suffers from pastiche overload - yet even then we get our first glimpse of something raw, something behind the veil with the seemingly genuinely nostalgic "London by Jetpack" that tells a surreal tale (to a tune not dissimilar to that of "Andrew in Drag") of a summer in London and Merritt’s wish to return there - a very particular wish to return there in 1980.

It’s an early sign of openness, an admission of shared humanity that Merritt, across his work, even across this array of songs, rarely offers.

“They piss on your dreams / Then muzzle your screams” offers the delicious repeated chorus of "Why I am Not a Teenager" at the close of the second disc, a perfect example of the couplets in which Merritt can tell a harsh truth and display the darkest of wit.

Later there are many choice moments – "Ethan Frome" sees Merritt dedicate an entire song to Wharton’s masterwork to delicious dividends - “95 pages of tragedy / Difficult to put down”; the musically opaque, AIDS-concerned "Dreaming in Tetris" - “All the young dudes of 25 / Caught diseases, few survive”; the pure strumming summer pop hit that is "Me and Fred and Dave and Ted" - a fun-loving tale of low-living.

However it’s on disc three that we hit a sweet ice cream seam of utter brilliance with a run of songs which make it hard to draw an equivalent comparison. 1998’s tune, "Lover’s Lies" is a gold-minted pop classic (“They should make us roll our eyes” he neatly observes of said lies) - minor key, lachrymose and tender as a torch song it leads into "Father in the Clouds", a heartfelt, never-written Go-Betweens masterwork that is somehow bettered by "Ghosts of the Marathon Dancers" which takes a chamber pop parade and marries to it one of the most evocative, honest lyrics on the record. “All the music and dancers gone / But the dance goes on” he offers sadly. Merritt displays a mastery for specificity on one hand, a huge talent for the broad sweep on the other. That the song actually makes reference to itself in its own lyrics only adds to the charm.

"Have You Seen it in the Snow" continues the run of excellence, Merritt lyrically unguarded, vulnerable, an atmosphere created similar to that of REM’s "Nightswimming" in this tearful hymn to New York City.

This central section is astonishing and, as the heart of this collection, it forms a strong argument for this being Merritt’s most impressive, heart-grabbing work.

Later there’s more - more brilliance like the impossibly sad "Never Again" (In response to the cliché about a break-up Merritt responds “But I don’t want fishes / And you don’t want me” later noting, unflinchingly that “Even my own clothes remind me of you”. Oh no.) or "’Til You Come Back to Me", a Tom Waits-like dose of bar-room bleak; more fun, trashy stuff like the meandering sitar sounds of "Quotes" or the dumbed down rock n’ roll parody of "Surfin’"; and, in the home stretch of disc five, a pair of songs to take to your dreams…

"You Can Never Go Back to New York" (“…Because it changes as quick as the weather”), is an acutely well-observed song of adoration and acceptance; New York is impermanent; like time is irreversible; like nostalgia is illogical; like what’s been done cannot be undone. Merritt finds, suddenly, in hilarious contrast to the whole conceit of the record that the future is brighter than any vision we can have of the past.

Yet just moments later, on "I Wish I Had Pictures" (you’re imagining how heart-destroying this song is based on the title and, well, you’re not even close) we find a profound tale of Merritt’s and our attempts to capture and recapture the past, the desperation to cling on to everything that has gone before when even “The things I remember are probably wrong”. Merritt seems to be having it both ways - one foot in the haze of the past, the other striding forward into a brave future.

Though, by the close of this outlandish set you’ve been taken on such a detailed, intelligent and, in its centre and towards its end, absolutely heartfelt journey that you are inclined to allow him to do just that.