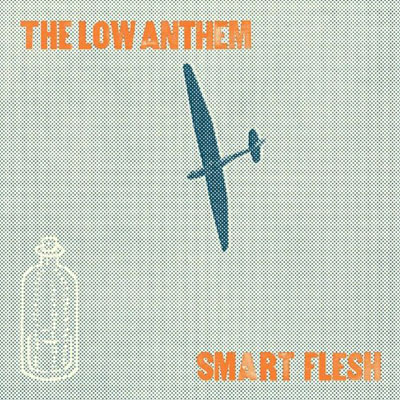 Smart Flesh is the kind of The Low Anthem affair to which we’ve become accustomed over the last couple of years, this being the fourth album from the Rhode Island based band. Weaving, wailing slide guitars enrobe themes and tales of times gone by, simple lives where falling in love is about the only thing there is to do. They’re nice tales, that’s for sure – lyrics which are encouraging, reassuring to hear whilst listening on the daily commute in a bustling Capital. But as nice, or often melancholy as the stories are, they’re stories that have been told before – such as those rattled off by an adorable, slightly forgetful old relative at a gathering – the same tales time and again.

This is not to devalue the lyrical content of the album – richly articulated and masterfully written songs are nicely tracked, offset by harmonicas, a tambourine tinkle here and there, a pump organ setting the scene. “First she shot me with whiskey / then she chased me with gin / swore I was a cure / for the shape she was in” – beautiful lyrics, accompanied by a well explored, yet fairly well trodden musical landscape.

Things get lively on anthemic, brass-led ‘Boeing 737’ a rejoicing, refreshing, heavily layered track featuring a pounding, sturdy rhythm – a real wake-up song after the delicate, gentle preceding track ‘Apothecary Love’. These up-tempo moments which have featured strongly on previous releases are few and far between on Smart Flesh, which favours the more down-tempo, atmospheric clarinet constructions of Jocie Adams on tracks such as ‘Wire’. As such, Smart Flesh holds high moments as well as low, both in terms of the sentiment of the album and, at times, the experience of the listener.

Singer Ben Knox Miller’s voice is as hauntingly poignant as ever, richer and more refined than on 2007’s self released What The Crow Brings, as are the more bluesy vocals of Jeff Prystowsky, and the quality of musicianship throughout the album is a real treat. Pianos, gently lilting – clarinets and banjos pick, tickle and crooning their way through the atmospheric, longing and mournful tracks. It feels very reflective as an album, and the themes running throughout are considerate and philosophical. All of the elements are good, and combine to make a consistent, well constructed listen, but there’s an unfortunate prevailing feeling that we’ve heard these tales before, and to the same soundtrack.

The Low Anthem have been at this for a little while now, and have discovered a sound that they know how to produce well, strikingly and consistently. But after 2009’s sublime Bella Union release, Oh My God, Charlie Darwin, it would have been nice to hear them spreading their wings, and venturing into new sonic landscapes – but perhaps that’s a bit unfair. Fourth time around, the group have clearly found a sound and shape that they’re happy with and which isn’t a chore to listen to – but for this listener, it’s an album which leaves a longing for something fresher. It’s arguably not a very outgoing album, there’s a lack of spontaneity, but it is well made and telling of The Low Anthem as a collective, demonstrating the cohesiveness and intuition of the group. It’d just be nice if they had pushed it a bit more, and ventured a little further out of their comfort zone…maybe next time.