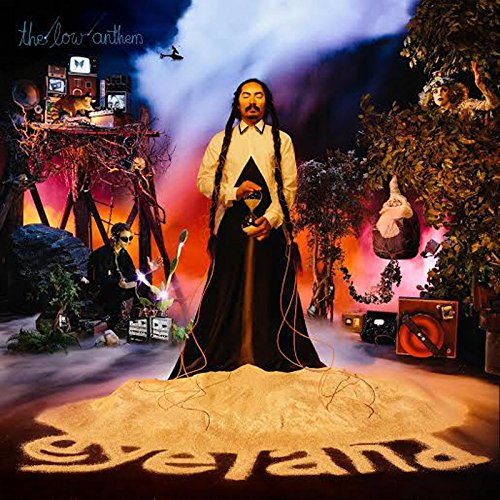 Echoes of Americana can provide quite a lot of sonic comfort food, but a distinctive soundscape, even one of the quality on Oh My God, Charlie Darwin and Smart Flesh, the first two albums by The Low Anthem, is rarely musically nutritious indefinitely.

It was the strength of the writing, allied to the production, that marked out these two releases on their original appearance. And within each disc, there were some noteworthy illustrations of a band willing to go beyond the genre expectations. Think "The Horizon Is a Beltway" from the first record, a breakneck-speed track with a ferocious energy. A radical departure is, by its nature, risky. One as striking as that on this new album is certainly provocative, yet at its best Eyeland demonstrates a dramatic (in the literal and figurative senses of the word) engagement with form and ideas that represents a triumph of forward thinking.

The context for this is provided by two developments in the band’s history. The first is the taking over of a disused theatre in their home town of Providence RI, to create a recording studio and live music venue. The second is the band’s link-up with a local drama troupe that had, in 2014, an embryonic narrative waiting to be brought to the full for performance. The resulting Eyeland is a surreal musical experience in some ways. Occasionally, the disparate sound effects threaten to overwhelm the narrative drive on a fine track like ‘Her Little Cosmos’, but where the sound collage is more balanced, as on the wonderful "Pepsi Moon", the verbal imagery is more to the fore and the outcome is outstanding.

It is clear the band is determined to force its collective musical talents in new, challenging directions, and those who admired the (admittedly rather more limited, in terms of adventurousness) range on the earlier discs will appreciate the unnerving beauty of "Waved the Neon Seaweed" that brings together so well, without any trace of artifice, industrial clanking and spectral echoing. Yes, really.

The more orthodox sound and structure of "Behind the Airport Mirror" is a well-sequenced contrast, though the lyrics referring to the solitary practices of certain border guards are arresting in their own way. "In the Air Hockey Fire" (the traumatic event at the heart of the drama) more clearly focuses on narrative details before giving way to a further sound assault that effectively shifts between battlefield rhythms and a winningly eerie wordless "Yellow Submarine". Ben Knox Miller, founding member of The Low Anthem, recently referred to the forthcoming theatrical production as “a large-scale sound installation, with professional actors, and us as the pit band”, and this notion of Eyeland, as it exists here on disc, as a type of soundtrack is pertinent. The early cinematic excursions of Lynch or Cronenberg come to mind.

Precedents for The Low Anthem’s direction of travel evident on this album might include Radiohead’s post-OK Computer peregrinations, though one might also point to an earlier deviation, going back forty years, in Peter Gabriel’s working up The Lamb Lies Down on Broadway. If at times Eyeland is fragmented, this is not from any faltering of creative energy but reflective of a moving beyond a schematic interpretation of a literary-dramatic work, as well as being a response to the themes of physical and psychological breakdown explored in that work. It is the sound of a band reaching into new musical territory. Eyeland is flawed but unquestionably rewarding and, at times, outrageously impressive.