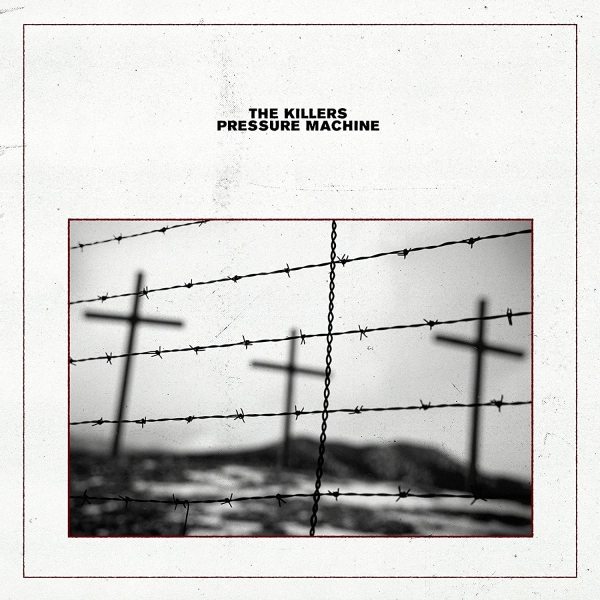 The Killers are a stadium band. That’s to say, they craft songs made to rattle around the highest nosebleeds of behemoth structures, ready to be hurled into the night by ecstatic arms thrown in the air. Pressure Machine isn’t that Killers.

Album seven is the three-piece finally unveiling that great American Songbook that they’ve been threatening since Hot Fuss’ nods to named characters and the world they inhabited.

Born out of the silence of the pandemic drawing a halt to their promotional run for 2020s Exploding The Mirage, according to frontman Brandon Flowers, Pressure Machine is indeed the result of an echoing quietude. One that roams free, filling up the space in the vast land that is North America, where lives, such as those Flowers and co document here, hold their understanding of the world and its finiteness.

With Pressure Machine’s spine taking the form of documented stories from citizens of Flowers’ hometown of Nephi, Utah, the connecting raw interludes are charged with bringing the starkness of everything from suicidal ideation via freight trains, to the hand-on-heart till-death-us-do-part, god-fearing-and-questioning reality to life.

In contrast, for a decade or so now, small-town Americana has been fascinating to those from afar, particularly in these British isles where the fetishisation of that good ol’ American dream ekes through dirty-burger joints, faux run-down bars, and camo wearing, pickup truck revving machismo while listening to plastic country stars like Luke Bryan. But this is an unfiltered look at the gritty reality of those born into it, along with their beliefs - their mundanity - those tokens that get left behind in the synthetic version we surround ourselves with.

Taking their position as being charged with soundtracking such timidly vulnerable, and hauntingly dark tales, The Killers weave throughout a host of Americana, dazzling alt-rock, acoustic-driven country - often all swirling into one powerfully omnipresent wave - sealing Pressure Machine’s fate - much like its residents - into being something meekly unabashed but ultimately full of heart.

Flowers’ ghostly echoing first words on “West Hills” - “I was born right here as I am / God’s own son” - never has anything felt more appropriate for the feeling that radiates throughout small-town living. Amongst beautifully haunting piano comes this sermon, till the wind picks up pace with break-neck rattling drums representing the heartbeat of pride and fear when all you know is the boundaries of a small county, as Flowers howls into the fray.

The moments that hold are the ones that feed into that driving element that’s aided The Killers stadium rise since 2004. While “West Hills” reduces this to a sunset soaked urgency, “In The Car Outside” and “Quiet Place” are a more glamorous equivalent, hitting the straight black tar for one more chance at something.

Certainly, a case can be made for the flow being difficult to fall into. The pre-cursing stories do remove you from the enveloping resonance through ominously foreboding rumbles before the literal winds circle like vultures for prey. Similarly, “Terrible Thing” is too focused on hammering in the words, through gently plucked acoustic and the distant harp of a harmonica, particularly for so early in proceedings. It feels like too much too soon.

The hubbub of Imploding, or any of their radio-ready, stadium-filling hits, is certainly amiss save for a few of those highway-burning moment, but that vast space - reaching from the desert sand up to the twinkling, unpolluted stars - is instead filled with an intricately laced, boots on the ground humanity that feels necessary, particularly in a world so polarised. Even Phoebe Bridgers appearance on “Runaway Horses” sits as unsuspecting as Nephi on a globe - yet, to remove it, everything would feel unbalanced.

As the album reaches its end, the idea of Pressure Machine comes into full view. “Desperate Things” falls apart amongst Flowers' lamentation, pushing The Killers into a boundary that whips against their radio-ready norm. Yet still, softly boiling away “The Getting By” realises this fact is what “gets right underneath ‘ya” till we’re told that twice a day that freight train comes on through and the recorder clicks off.

There’s no doubt that those fan favourite albums - Hot Fuss, Sam’s Town et al - are so filled with their nostalgic twinkle that they will remain as such. Pressure Machine isn’t made to compete with their jubilant, indie trenched past. It’s made to be an honest portrayal of a life that, in its own desolate way, holds a white-hot shine to those that in turn hold it dear. This is an unknown lifeblood that The Killers have brought to life. They've created something cinematic, pragmatic, and above all, fantastically like nothing we’ve heard from them before.