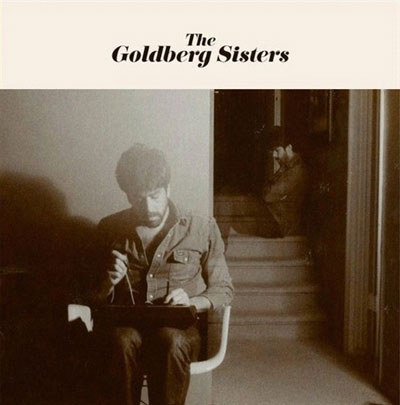 Adam Goldberg. The Goldberg Sisters. LANDy. Actor. Director. Writer. Producer. Music maker. Adam Goldberg is known in many guises, and each one allows him the opportunity to express a different part of his creativity. Within Adam Goldberg we find a brilliant mind, one overflowing with genres of inspiration that apparently can’t be channelled through a sole medium. As such, we find ourselves with the latest of the Goldberg creations, a new album entitled The Goldberg Sisters. This release marks the second LP from the artist, who chose to change his musical moniker after the release of his first album under the name LANDy.

In 2009, LANDy’s Eros and Omission was released, the culmination of six years worth of home recordings and numerous collaborations. The Goldberg Sisters was, in contrast, written in the short time between that last release and the present, and so much closer to the moment of recording than his previous record. As such, there’s more of a sense of cohesion to this collection than on his last. The consistent instrumentation leads us to feel as though there’s a single tale running continuously through the songs, a story reminiscent of the kind which Goldberg so often portrays on screen – darkly playful, morosely romantic and defiantly loveable.

The Goldberg Sisters is a fairly classic folk-rock album in its construction, a guitar based record featuring Goldberg’s unmistakeable vocals. Although tonally quite different, vocal influences can be attributed to the classic works of The Beatles and David Bowie, both lyrically (aside from the expletives) and melodically, especially on leading single ‘Shush.’

Persistently maintaining the pace of the record are the marching beats of the choruses which, up until the middle of the album, strut around with all of the confidence, vigour and charisma that we’ve come to expect from the work of this performer. When the middle section of the album arrives with track ‘You’re Beautiful When You Die’, the overall tone of the record softens. A lo-fi, sombre song – slow, quiet and full of tape buzz, the lullaby-like track brings the pace of the album to a lowly halt before the introduction to ‘Erik Erikson’ charges through the speakers with its low pitched guitars and smashing cymbals. This track is, in turn, followed by the melancholy, but equally as driving ‘Third Person Blues’ – a soulful, yearning song with beautifully layered vocal lines surrounded by delicate brass tones which produce some really touching moments, and showcase the kind of harmonic cadences that our extremely capable host is evidently gifted at producing.

This is a very confident release, and Goldberg sounds comfortable and at ease within the music that he’s making. The lyrics are intricately shaped and moulded, the arrangements thoroughly considered and the instrumentation meticulously pieced together. The dynamics of the songs work particularly well, proving Goldberg to be a master of the rise and fall, both musically and emotionally.

The Goldberg Sisters is a very honest album, with a genuine, natural feel about it. It’s as though with his first release, Goldberg was trying to summarise his whole musical past on one album, but with this follow up, Goldberg has grasped the freedom to explore, to experiment and to find a musical footing that not only is he comfortable with, but that he’s also very good at creating. The only criticism to be made is that the songs are sometimes a bit predictable, but there’s always a little gem of a lyric or a hauling vocal to steer the song away from any kind of monotony. Adam Goldberg, The Goldberg Sisters, LANDy, we’ll call you whatever you like, just keep on doing what you’re doing.