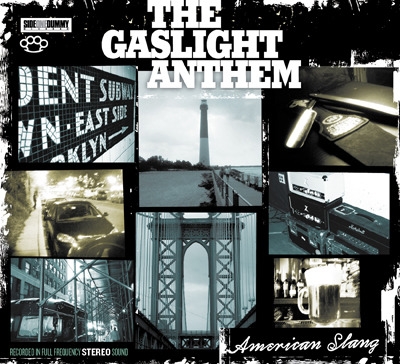 By 2008, punk rock felt passe to the Animal Collective set, and so New Jersey’s The Gaslight Anthem’s The ‘59 Sound started out as a bit of a cult record. Over the coming months word of mouth grew on the album and it began garnering more and more praise. Maybe it was because the album itself is a grower. The band’s sound is a dense, clamorous rush and apart from a few songs like all-time classic ‘The ‘59 Sound,’ it took several listens for the rest of The ‘59 Sound’s strengths to really emerge and the album’s songs to differentiate themselves. The content of lead singer Brian Fallon’s lyrics, all sung in his best Springsteen impression, also took some getting used to. The lyrics didn’t simply suggest The Boss’s lyrics, they quoted them. And Fallon didn’t bother to differentiate between hip and uncool influences as he just as reverently quoted Counting Crows. As with the sameness of the music, the lyrics emerged as a strength on repeated listens.

Whereas Springsteen romanticized small town New Jersey/America through archetypes, The Gaslight Anthem, a 21st century band with a greaser look, romanticized the archetypes themselves while just as aptly tapping into the hope and desperation in their undercurrent. The result was a fantastic album that felt original and vital for its new take on very familiar territory. Now on their follow up, American Slang, The Gaslight Anthem has tapped into the same formula. While the songs here feel here a little less urgent and personal and Fallon sounds at a greater remove from the desperation in his lyrics–maybe that’s what happens when you go from idolizing Springsteen to singing on stage with him at Glastonbury–the band avoids a slump with an album full of solidly enjoyable songs.

There’s nothing here as immediate as ‘The ‘59 Sound’ but American Slang is not without its charms. The band doesn’t really expand on their sound, but throughout the album, they play together wonderfully. Drummer Benny Horowitz keeps the band moving with a skittish energy that Alex Levine’s skipping bass lines complement perfectly. The production is a little too clean and processed sounding, but the guitars still manage to sound hot, especially on ‘Stay Lucky.’ The song, a kind of more defeated, ten-years-later take on ‘Dancing in the Dark,’ is a breakneck rush with Fallon’s backwards-looking verses about the lost feeling of youthful potential echoed by clapping riffs and a pretty, wild sounding guitar part that builds to a chorus of, “You’re never gonna find it/Like when you were young/And everybody used to call you lucky.” The band is no less ambitious and aims consistently for big anthems on songs like ‘Bring It On’ and ‘Boxer.’ While the songs work, they never connect in a way that will have you still singing them the next day. Fallon continues to work with the same cast of working-class romantics, but he no longer cribs directly from his heroes and the lyrics, while still strong, no longer have the meta-quality that lent them an extra dimension on The ‘59 Sound. Elsewhere, the band does well on the jaunty ‘The Diamond Street Choir’ and a fun Western sounding guitar part on ‘The Queen of Lower Chelsea’ but the overall effect of the album is unfortunately a little forgettable.

There’s not much bad to say about American Slang except that it doesn’t sound as inspired as their previous album. The Gaslight Anthem write good songs, but they’re working with a sound and subject we’ve heard before. Without the spark of The ‘59 Sound, the band is in danger of becoming as workmanlike as the everyman heroes of their songs.