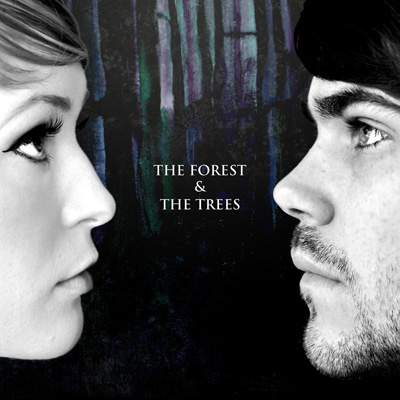 If it’s sickeningly sweet pop romance you are after, The Forest & The Trees are your guys. There is something about husband and wife duos that manages to roll each and every romantic cliché into a big chamber pop ball and market it as legitimate, intelligible music. No-one else could get away with such blatant crimes against literary integrity and make it sound so utterly convincing. It is perhaps this unabashed willingness to forgive their romantic indulgence, that fills me with hope that maybe some married couples really are in shout-it-from-the-rooftops style love.

Joel and Linnea Edin share there marital bliss with us in the style of blissful indie pop; think Clare and the Reasons, minus the high production chamber pop orchestra. Their music is altogether more organic, as the rather pastoral name would suggest. Their sound is earthy and deep, and merges together folk, indie pop and a little shoegaze. The self titled album opens with ‘Mother’, which, though it sounds like it could launch into some odd down tempo cover of an ABC’s ‘The Look of Love’, soon falls soothingly into a lackadaisical lullaby full of replicated vocals and unobtrusive synthy riffs.

The album then drifts through almost an hour of twee indie pop, all denim jackets and hazy days. The vocals flit between Linnea’s solos and some spouse on spouse action, creating quite a nice contrast between Joel’s intensely evocative voice and Linnea’s childlike naivety. It does create a rather odd mix of Elbow meets Clare and the Reasons via Trailer Trash Traceys though, but it seems to work.

There are some definite influences going on in The Forest & The Trees, with ‘Bohemian Boy’ sounding as if it may sink into some heavy rendition of Jesus and the Mary Chain, complete with reverberating guitars and wailing vocals. Yet it is precisely this contrast between the deep backing melodies and the light and airy vocals that give them their unique sound.

This lethargic album is bang in time for long and lazy days of lounging in the park, and hopefully will be recognised for the beautiful twee pop that it is. Their runaway vocals, nostalgic lyrics and busy backing track make for one sleepy, comforting hour. They don’t forgo a good drum beat to try and mute harsh tones, and they pay immaculate detail to their eclectic mix of instruments and sounds.