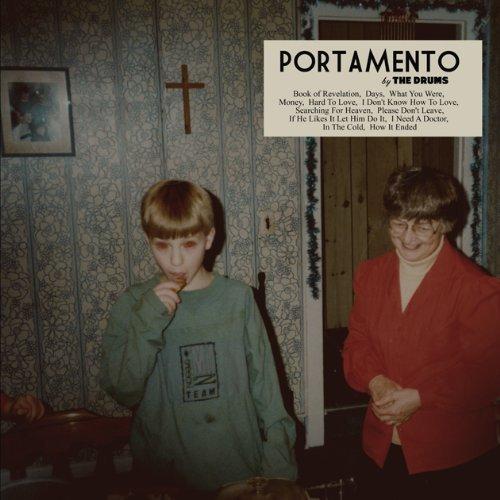 The phrase ‘there’s a fine line between love and hate’ epitomises everything about The Drums. When the NY indie outfit, released their eponymous debut last June they were hated and adored in extreme equal measures, some accused them of too much preening and puffing of one’s chest, while the other claimed them to be the new Smiths – a band destined to be the pioneers of the then-everywhere resurgence of C-86 indie. Whatever side you did reside on didn’t really matter, the fact was they implored you to choose one.

Portamento, meaning gradual transition, is the perfect choice to tag their swift follow-up with, here The Drums start to explore the other 80′s craze – electronic music. The explorations are slight, almost modest (bar the synth-fest that is ‘Searching for Heaven’), steps into unfamiliar waters. While transitions are essential they can be pretty awkward, and sadly this comes off as somewhat uneasy, The Drums clearly suffering from growing pains. The 12 tracks act as an documentation of these growing pains, they are heady highlights and some low moments, what category each song falls into is decided by whether The Drums decide to talk dreary but sound happy (the juxtaposition that made their debut so brillant), or talk dreary and sound dreary.

For example, on ‘Money’ we see Pierce bemoaning the fact that, yeah you guessed it, he has none, but there’s the erratic up and down bassline, tight handclaps and killer chorus to combat his whineying. Whereas on ‘In The Cold’ it’s just too much, a morbid overkill of depressing storytelling and a tepid, half-arsed melody, it lacks that killer bite that ‘Down By The Water’ had. However, it must said not all developments have produced such lukewarm results, the topics of lyrical fodder are more broad and varied covering; isolation, the need to please, love and religion.

Opener and probably the best thing here ‘Book Of Revelations’ puts religion in its place with two simple lines: “I’ve seen the world”//”And there is no heaven, no hell”. ‘What You Were’ the first song to be wrote for the album and clearly about Adam Kessler’s messy departure, Pierce sneering delightfully: “I always knew what you were” repeatedly throughout another great chorus. The words are just as simple as the last time around, but now they have more to say. As a result they sound more mature and don’t fall privy to woe-is-me naivety.

While this latest offering is certainly more difficult and less hook-laden than the less, it’s not quite the disastrous misstep some critics would have you believe. Here we have a band who in a short amount of time since arriving into the music industry’s conscious are already trying to grow, and while it may producing mixed results now, give it time and we may be witnessing something special very soon.