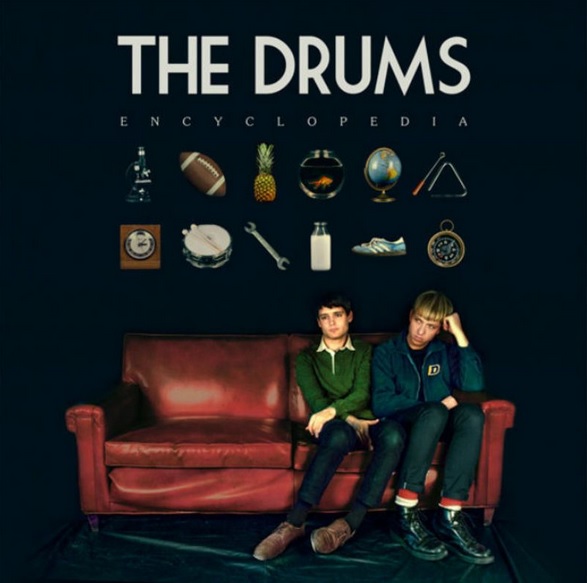 Reduced now to a two-piece, NYC indie-rock outfit The Drums are back. By the skin of their teeth. Emerging from a mushroom cloud of personal disputes and industry exhaustion, the band that produced student night staple “Let’s Go Surfing” has been cleaved in half. It’s been three-odd years since Portamento, the last record to feature Connor Hanwick, and the lingering enclave of Jonny Pierce and Jacob Graham are seeking reinvention.

“We were feeling very angry, confused, and alone when we made this album, and we wanted to be very honest this time around, even if being honest meant making some people uncomfortable. We've left the beach for higher ground, always searching for hope,” Pierce remarks on third full-length, Encyclopedia. The clearest intent of this album appears to be a longing to distance themselves from their most popular effort.

The first snippet from this record definitely does that. “Magic Mountain”, though it wields familiar timbres and jangly-pop motifs, is certainly a darnsight more... evil. Post-punk shadows abound, the cut slivers through abrasions normally reserved for Crystal Castles, HEALTH and other noise warlocks. It's malevolent, beastly, monstrous, and, ultimately, magnificent. It's a howling, bickering effort, crammed with distortion and dissonance. Banshee yowls and disembodied malice are in abundance. It's a gamble, yes, but it's one that pays off. Within seconds, they reinvent themselves and erase memories of twee-twanged surf-pop.

“Bell Labs” continues the tumble down the rabbithole. Distinctly not Drums-y, it verges upon the offerings of Grimes and her Arbutus' rostermates. It's otherworldly. Dystopian. “Deep In My Heart” is more optimistic, but still unmistakeably tarnished with post-punk blackness.“Face Of God” is another similar effort, with sci-fi darts and anthemic hooks. The Drums are keen to make a name for themselves outside of poppy one-hits, and there's enough argument to say they've achieved that.

Saying that, they also appear unable to completely do a U-turn. There's still a part of Pierce and Graham that wants to go outside and feel the warmth of sunshine. Perhaps they don't want to go surfing, but they'll at least chill under a parasol with a beer; as Pierce stated at the outset of the record, “[we're] always searching for hope.”

Tracks like “Wild Geese”, while clearly a new realm for The Drums, with it's ever-so-slightly soulful synths and analogue frivolities, looks on the bright side: “Onward and upward/through the clouds, away from the rain and the wind that holds us down.” “US National Park” plod along like a '50s prom end-of-nighter. There's a vaguely doo-wop bent here, and it's sweet. “Let Me”, aggressive as it may be, is peppy and, crucially, alive. It's sung and played with confidence, with a wry grin. “Kiss Me Again” follows the same vein. Encyclopedia might not be a record to soundtrack cheery bank holiday getaways, but it provides enough counter-attack to its own bleakness that it's not an inherently malicious listen (although it does have its moments).

For those pining away, beckoning the return of The Drums, chances are this'll be a big smack upside the face. Diehard followers may be taken aback by the honesty, brutality and contrasts on offer here. Whether or not that's a pleasant surprise remains to be seen, but casual followers of the twosome may appreciate the evolution slightly more. If you had less invested in the prior styles, there's every reason you'll love this.