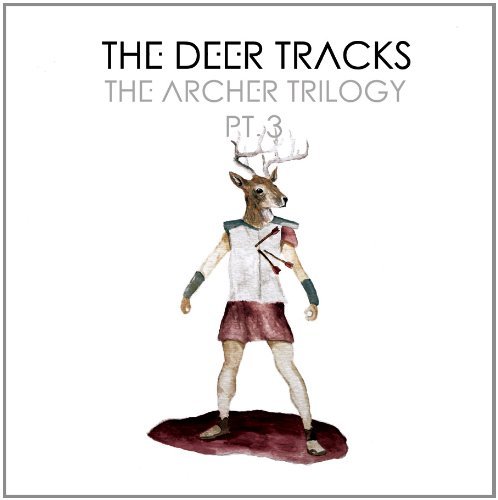 Quite who The Archer is remains to be seen, but his titular trilogy began in 2011 with a five track EP of contemplative electro-pop in the Scandinavian milieu. It was a very cool effort, and was followed later that year by a more fully formed Pt. 2. More aggressive hooks awaited, sheerer drops, madder glitches, more playful choruses. Pt. 2 was the obvious evolution but it was the right one, and made for an equally rewarding record I still happily return to now.

And thus the stage is set for the final act, the curtain call. The Deer Tracks could safely be considered prolific by this stage – but is Pt. 3 apt closure or frustrating cliff-hanger?

The album begins at a whisper, a dark, lilting whisper not unlike a cross between Husky Rescue and the eccentric, syncopated beats of Karin Park. Indeed, this new (dark) material is more akin to Pt. 1, albeit fleshed out and clearly maturer, the dynamics and instrumentation a little more subtly varied. Short of innovating more obviously, it’s again an appropriate evolution, meaning early tracks such as ‘W’, ‘Divine Light’ and ‘Astral Ship’ are less immediate than their Pt 2. counterparts, but as a result get under your skin more, draw you further in to their world.

Worry not – Elin Lindfors’ bizarre melodic rasp and David Lehnberg’s sweeter, boyish timbre are still ever-present, a fey reminder that the inquisitive duo don’t take themselves too seriously. Pleasingly, mid-album, ‘Red Eyed Zebra’ ratchets up the whimsy with its torn up glock, xylophone sounds, and orchestral sweeps, to charming effect. It’s wistful, which is perhaps the best description of the undercurrent running through the 42 minutes, and manages by this point to strike the perfect balance between Pts. 1 and 2 to easily reflect the band at the height of their powers.

The band happily admit to taking the “kitchen sink” approach and sure, there is a mad melange of sounds, organic though heavily processed. taking in the “not quite sure what the hell that is”, but it’s always in service to the melody, or the pacing. ’Lazarus’ is particularly dense with trance hits, semi-wordless chants, great fuzzes of decaying reverb.

Interestingly, the final track of Pt 2. is titled ‘U-Turn’, whilst that of Pt. 3 is ‘Road To’ – a quixotic end to an album that nevertheless feels like a finished product, and an apt cap to the trilogy. Despite the mad proliferation of comparable contemporaries, The Deer Tracks have balanced out, and in so doing added context to their oeuvre whilst avoiding sounding derivative.

In the official copy Elin admits: “I like when there’s not an ending” – but as ‘Road To’ fades into nothingness, I hope she means more of a fresh start because Pt. 3 reaches great heights whilst never feeling like a cliff-hanger.