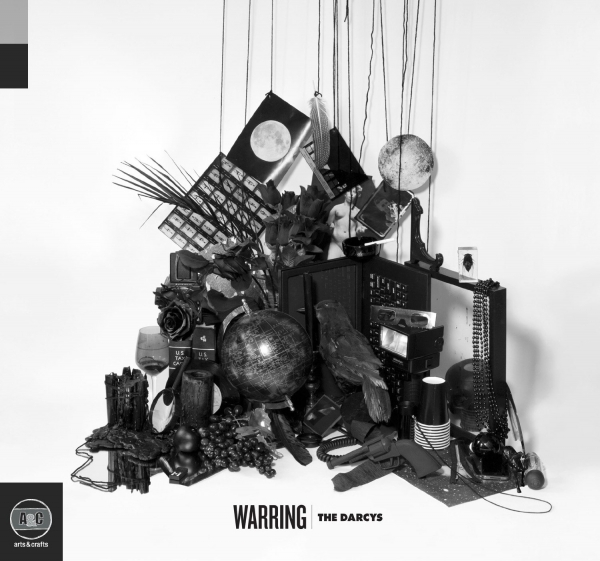 True to its name, there’s an integral juxtaposition to Toronto-based quartet The Darcys’ third album, Warring, which the band itself cites as being “about moving forward, about learning in motion … It is anxiety about the future and the triumph of life in the moment.” Its instrumentation has a well-earned larger-than-life aura about it, while its vocal lines parlay with a comparatively cautious humility, creating an internal discord that is indeed both anxious and triumphant, but can be a little rough to move forward through. However, if you can step beyond that air of apprehension, the pitch-perfect instrumentation is well worth the mild scuffle of one’s soles.

Warring sees The Darcys functioning with an all too common trapping: they have a very distinct, pervasive sound and style which they’ve clearly come to favor quite fondly, creating a lingering air of similarity that persists from track to track. Now, whether or not that’s a pro or a con really depends on one’s ardor for the flavor—The Darcys have pieced together a strong sound and developed a keen tightness in their instrumental unity, so naturally they stick to their guns. But it’s a trapping in that, after a while, Warring‘s aural aesthetic becomes somewhat whitewashed, and individual compositions can tend to bleed together.

If anything, Warring suffers most from a lack of separation between emotions. In Couse’s lyrics, one can infer ascensions of frustration, anger, wanting and more—the typical resonant emotional fare. And Couse’s voice has a great, lush sound that’s soulful and brooding—at times reminiscent of Antony Hegarty (Antony and the Johnsons)—yet it’s often quite difficult to pick any distinctive emotion from within his vocal lines, given that he plays his inflections quite close to the hip.

While that’s a lingering issue throughout Warring, at times that aloofness plays to its favor. Take the evocative, haunting “The River,” which contains just the right blend of serenity and gloom to not require its emotional high-points to be so intricately spelled out by the vocals. The song is laced with a mildly off-putting tension—just enough to cultivate a lingering air of concern—giving an opportunity to really appreciate the ever so docile vocals as they clash with the more pervasively high-toned harmonies.

Yet The Darcys shine brightest with fewer reservations, such as on louder, busier tracks like “Hunting” and “Pretty Girls.” Cutting the rhythm section free from their reserved, brooding leash gives them the opportunity to rise to their titanic grandeur, which illustrates just how well written and performed Warring‘s instrumentation really is. There’s no discounting The Darcys for putting their time in studio-wise, as Warring is immaculately tight, and each instrumental element is carefully composed to embrace those of its fellows.

Warring has its trappings, but they’re only that: trappings. They’re entirely spinnable. One man’s pain, another’s pleasure—so on and so forth. They’re immediately apparent, but they ring as stylistic choices in the name of creating a mellowed, light-handed aesthetic rather than any sort of songwriting foibles. All the same, it’s an album of evocative discourse brought to life by impeccable arrangement.