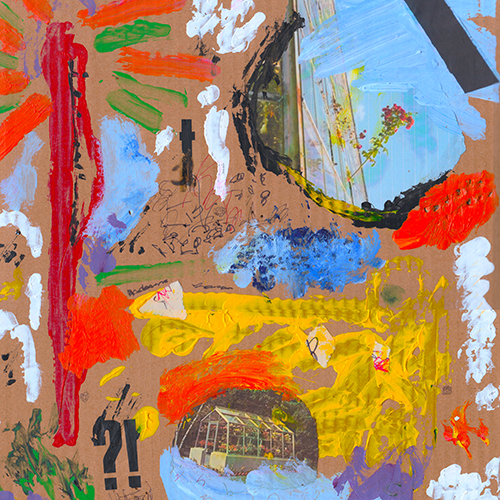 There’s a confident swagger in the sound of experimental rock quartet, The Cool Greenhouse.

Arriving with a kaleidoscopic carnival of swirling, discordant pop hooks, their self-titled debut is a far cry from the lofi bedroom sound of previous releases. Formed in rural Norfolk and fronted by spoken word artist Tom Greenhouse, the group deliver the type of post-punk lyrical realism that South London absolutely lusts after, effortlessly gliding through poignant observations on politics, the mundanity of living and pop culture gone wrong.

Opening number "The Sticks" parades into an eerie countryside with musings on going “a bit nuts”. A slight understatement as tales of robot shopkeepers and surveillance wires disguised as spaghetti start unfolding, alongside vivid descriptions of nonsensical delusions like “grinning Jimmy Savilles painted on your eyelids” and “Yoko Onos on treadmills, stretching out into infinity”. Setting the stage for a quick witted frenzy across the eleven-track offering, their intensely detailed approach to stories set within the monotonous everyday, shows similarities to contemporaries Do Nothing, Black Country New Road, and Squid.

Although joining a music scene that is already crowded with half-sung, half-spoken lyricists, The Cool Greenhouse have veered towards minimalism for an avant-garde slant that is frankly a refreshing deviation. By side-stepping the pit of guitar-driven, post-punk ecstasy, the group have pushed their lyrics to the forefront, forming a sound that is reminiscent of both The Fall in intensity and The Shadow Ring in experimentation.

Whilst opting for a more refined, studio sound in their debut full-length - notably recorded in Nottingham’s bastion of the DIY circuit, JT Soar - the band haven’t strayed far from their signature warmth, embracing the mundane with a romanticised flourish. “You met your old history teacher, while you were sucking on a lemon / and you’d just eaten a ham sandwich and you were sitting on a park bench / and your mouth was a straight line. Oh, a perfect horizon” sixth track "Smile, Love!" narrates to an anxiety-inducing, repetitious soundtrack. It’s this directness, so blaise it’s almost humorous, that shows off frontman Greenhouse's penchant for storytelling, both nonchalant and captivating in delivery.

Exemplary of the album at large, centrepiece "Dirty Glasses" invites you to view the world from the band’s own, uniquely specific, perspective. Through a strange tale of dinner with Margaret Thatcher and political philosopher Friedrich Hayek, Greenhouse admits, with a long, drawn out pause, that “the purpose of this band is to offer a glasses cleaning service, at a very reasonable price”.

Through a debut cluttered with lyrical detail, and an array of instrumentation of violins, melodicas and harmoniums at their most simplistic, The Cool Greenhouse are now finding their own path in the post-punk genre - and it’s one that promises to be fantastical.