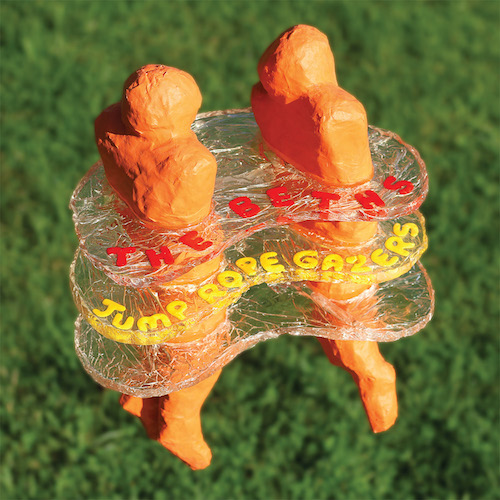 ​​The Beths’ Future Me Hates Me was one of the most self-assured and exciting debuts in recent years.

Driving rock with one foot in ‘60s bubblegum pop and the other in ‘90s punk, The Beths showed a keen ear for a catchy hook and the sharp wit for many a memorable line. Its slacker rock vibes belied the tight production where every piece fit together perfectly. The only question it left was, if this is their debut, where could they go from here?

Jump Rope Gazers answers that question with something of a companion piece to Future Me Hates Me. Where their debut focused on the anxieties and self-doubts that overshadow everything else, Jump Rope Gazers searches for solace in community. “If your world collapses / I’ll be down in the rubble / I’d build you another”, Elizabeth Stokes sings in “Out of Sight”, one of the album’s most tender moments.

Their recent tour with Death Cab For Cutie has clearly had some influence on them. The record features plenty of truly beautiful torch songs like "Out of Sight" the type that filled Death Cab’s Plans. “You Are A Beam Of Light” gives the stage over to Stokes’ vocals and an acoustic guitar, accompanied by some stunning harmonies. Here she tries to convince someone that their presence lights up her life, even if they don’t think the same. It’s a lump in the throat moment from a band that’ve only really gone all-out so far.

But they certainly haven’t forgotten how to write those big, excellent tunes filled with hooks and pithy observations. “I’m Not Getting Excited” is an assault of rollicking riffs and ripping drums, while “Don’t Go Away” features a fantastic slow head-banger of an outro. Not a single minute of Jump Rope Gazers is lacking in catchy melodies or that addictive energy.

Stokes has said that “I’m Not Getting Excited” is all about how she doesn’t want to jinx things. About the overriding impostor syndrome that seems to kick in when great moments or opportunities head her way. In truth, Stokes should knock those fears aside because The Beths have managed to create another overwhelmingly thrilling record. One in stunning communion with their debut but also distinctly its own creature.