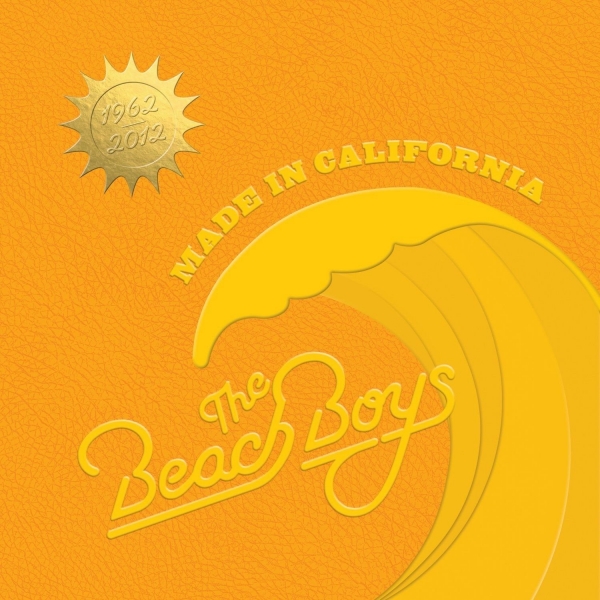 The first thing to consider when delving into Made in California is who this extensive box set is aimed at, and what is it for? Lavishly designed like a high school photo scrap book with unseen photos aplenty, there is too much music here (seven hours!) for someone taking tentative steps into a back catalogue crammed with so many aural delights. However, at the same time, there’s too much material included that connoisseurs don’t necessarily need. As great as it is to hear shiny new stereo re-masters, of which there are plenty here, even casual fans of The Beach Boys could probably do without hearing ‘Sloop John B’ again.

1993’s box set Good Vibrations hit the money due to containing a large segment of the then unheard Smile album. Twenty years later, we now know what that sounds like, so is there any point to Made in California? The answer of course, is a massive yes; content wise for sure and also because of the modern re-mastering techniques that have given much needed clarity to some highly complex and sophisticated rock music.

Seasoned fans of arguably America’s finest band will skip over the majority of the first half of CD1, as the real action only begins once co-vocalist and serial writ lodger Mike Love is marginalised and Brian Wilson takes control of the band, augmented by members of the famed session musician troupe The Wrecking Crew. The run up to Pet Sounds is where the finest stuff is to be found: ‘The Warmth of The Sun’, ‘Don’t Worry Baby’, ‘Please Let Me Wonder’ and ‘Let Him Run Wild’ all superlative three minuters that will never, ever get boring – sumptuous works of art that spurred on Lennon & McCartney over on this side of the pond, exquisitely produced, beautifully sung, masterfully arranged and hopelessly romantic.

The chronological track list is fascinating, as it clearly shows the meltdown of Brian Wilson. In fact, when songs from Smile are introduced, it still sounds weird, more so when you consider a typical lyric from main collaborator for the project Van Dyke Parks, psychedelic whimsy such as “The fullness of the wine, the dim last toasting, while at port adieu or die, a choke of grief, heart hardened I, beyond belief, a broken man too tough to cry” only caused consternation from the less artistic members of the band, resulting in further alienation from the head Wilson.

When ‘Vega-tables’, featuring Paul McCartney chewing sticks of celery and lyrics about getting excited about carrots or the bad trip instrumental, ‘The Elements’, are followed by Carl Wilson’s uncomplicated, mellow soulful pop like ‘Let The Wind Blow’ or ‘Darling’, it’s sheer relief. With the benefit of an elapsing forty five years, it’s understandable how Brian’s subsequent lost years occurred, it’s all here in the songs, Smile is the sound of drug induced mental health issues, and it couldn’t carry on.

After Smile’s shelving, Brian Wilson retired for a decade in bed resulting in the baton being passed to younger brother Carl, thus allowing the band to become more democratic, which, great songs aside, gave a platform for what ended up being Dennis Wilson’s colossal song writing talent, something of an unknown quantity up until then.

Although the Carl Wilson phase of the band was a commercial disaster, there are some really satisfying moments to be found. Pushed by their manager, Jack Reiley to become more relevant, the lyrical content took in ecological issues and hippy-ish musings such as “Let the poor find money” or “Pretty things like incense and flowers”, it didn’t really mean much, but sounded great. Carl steered the band away from Mike Love’s wish for them to, even back then, become an oldies act, the boys finally became men; even Love managed to rustle up a decent track…just one.

Dreamy songs such as ‘I Went To Sleep’, all five voices deliciously melting into one over a minimal bongo and synth backing, Brian’s ‘Busy Doin’ Nothin’, little more than acoustic guitar, oboes and vibraphone with detailed lyrical instruction on how to drive to his house and Carl’s ‘Feel Flow’, a sprawling, five minutes of insistent piano, saxophone, flute, flange effects and early use of synthesisers, resulting in a state of trance: all hold their own alongside their better known mid-sixties material.

‘‘Til I Die’ and ‘Surf’s Up’, two of very few songs that Brian penned in the years following Smile are two desolate musical tragedies of angsty despair. The former has Wilson considering the death he was so pre-occupied with in the early 70’s “I’m a leaf on a windy day, pretty soon I’ll be blown away, how long will the wind blow?” The latter, in its full band guise, rather than the stunning solo piano only version is up there with the absolute cream, it’s a song that defies you not to marvel at just what is possible in music every single time you hear it.

For a band that celebrated it’s fiftieth anniversary last year. Their barren phase is shockingly apparent here, after 1973’s Holland album, the creative force behind the band was spent. Brian tackling demons, Carl giving into Mike Love’s money making oldies tours, and Dennis who more than proved his worth with his soulful yearning on the anthemic big band led ‘Be With Me’, the funky 70’s rock of ‘Slip on Through’ or the tear stained ballad ‘Forever’, all included here, fell victim to internal band politics and not given the proper platform for his immense talent, the band’s loss, the majority ending up on his 1977 solo album, Pacific Ocean Blue, the only solo album of any real worth to stem from the band.

Although Made In California doesn’t have the tantalising glimpse of a mythical album like the Good Vibrations box-set did, there are plenty of lost gems, a set of live tracks containing songs you wouldn’t normally expect, a surprisingly punky take of ‘It’s About Time’ and a fierce version of their RnB number ‘Wild Honey’ both worthy of an ear. There are also notable unreleased studio tracks included, highlights to head straight to are Dennis’s beautiful ‘(Wouldn’t It Be Nice To) Live Again’, a surprisingly able cover of ‘You’ve Lost That Lovin’ Feeling’, an out-take from the ill-fated ‘Brian’s Back’ campaign of ’76 and an instrumental version of Brian Wilson’s horn-led homage to Burt Bacharach, ‘Guess I’m Dumb’, a song gifted to Glenn Campbell in ’65.

If a new fan is brave enough to delve in and discover the brilliance of a band whose purple patch lasted nine years (‘64 to ‘73), this is the perfect way to discover every phase of what they did. Warts and all, it’s all here, the electrifying highs to the depths of the lowest lows, all with a sordidly salacious back story of inter family dysfunction, law suits, alcohol dependency, genuine craziness and debilitating drug addictions that make Mick n Keef look more like Harry and Zayn.

As for the music, the sweet, sweet music, Made In California does a great job of confirming just how much more there was to The Beach Boys than sunshine and girls.