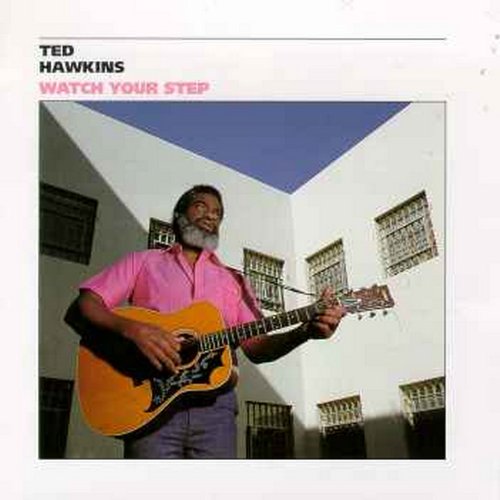 Ted Hawkins’ bizarre and lonesome world finally gets the reissue treatment — what lies beneath 1982’s Watch Your Step is a breathtaking collection of the storied blues artist, a stripped down journey into the soul of a broken and corrupted man, an album as troubling as his legacy.

Biloxi, Mississippi is a bewildering place. Tucked quietly in the southmost region of Mississippi, Biloxi is a rare sliver of pure, southern beachfront, surrounded by the Gulf of Mexico and hosting the Biloxi Bay. Of course, Mississippi is considered the birthplace of the Delta Blues, with a roster of Robert Johnson, Muddy Waters, Howlin’ Wolf, Charley Patton, Skip James, Mississippi John Hurt — you name it, and their roots are easily traced back to Mississippi. Biloxi, a town of casinos, tourism, and a population of 44,000, was one of the earliest settlements for both the French and Spanish, with roots tracing back to 1599. Biloxi is equally entrenched in this mythos of “deep south” Americana, a strange and often overlooked place, inundated in grotesque stories of bloodshed, slavery, and reappropriation of land. Yet, for some reason, these are some of the most beloved and fabled regions of America, where history goes to die, resurrecting itself as a polished, unilateral story of hardwork, patriotism, and freedom. It’s also the birthplace of Ted Hawkins, an artist whose existence was as unexpected and revolutionary as the music his home state birthed.

Born in October of 1936, Ted Hawkins was led into a life of hitchhiking, drifting, and occasional stints at reform schools, all by the age of twelve. Between all of this, Hawkins found himself involved with songwriting and guitar playing, two hobbies of his that would cement his legend decades later. He ended up in a state penitentiary by the age of nineteen, a stint caused by shoplifting a leather jacket. Whilst serving his time, Hawkins heard Sam Cooke for the first time — following that brief enlightenment, Hawkins was never the same. After wandering around the country for years, staying in Chicago, Buffalo, Newark, and Philadelphia, Hawkins ended up on the Venice Beach boardwalk.

Perhaps busking is one of those cliches so ingrained in our collective knowledge of pop culture that it can hardly be taken seriously. Yet, so many of popular music’s most beloved figures started this way: Rod Stewart, Tracy Chapman, B.B. King, Beck — the list goes on. Ted Hawkins was one of those diamonds in the rough, a man whose coarse voice was actually, in part, caused by the wind and sand from the Venice Beach boardwalk. Sitting atop milk crates, warbling blues standards — as well as originals — Hawkins was quick to draw attention, and it didn’t take long for an industry figure to notice. Bruce Bromberg, a blues producer and musicologist, awestruck from the talent that sat before him, quickly booked Hawkins studio time, recording twelve rough demos. Hawkins then ended up passing in and out of prison, some sentences for heroin possession, and one for a child molestation charge that Hawkins denied to his death in 1995.

In 1982, Bromberg again located Hawkins in prison, begging him to re-record the twelve demos that had accumulated nearly a decade prior. Hawkins agreed. What came after was Watch Your Step, a beloved, tormented, and masterful collection of originals, sparse and rawboned but full of promise and life. Watch Your Step was released via Rounder Records, an obscured roots-focused that has released works by Tony Rice, JJ Cale, Philip Glass, John Fahey, Woody Guthrie, Michael Hurley, and dozens of other popular and cult-favorite musicians alike. Hawkins fit comfortably within this all-star roster, as Watch Your Step received an absurdly rare five-star rating from Rolling Stone, and amassed a decent cult following. Then, at the snap of a finger, Hawkins disappeared once more.

When Bromberg located Hawkins at the state-ran California Medical Facility in Vacaville, he and photographer Carl Keyes somehow managed to arrange a photoshoot in the prison yard. What surfaced was an iconic album cover, finding Hawkins in a bright pink button down and a pair of blue slacks, his greying beard and freshly strung guitar sticking out like a sore thumb. Maybe this immediately added an element of mystique and fable, as it superbly represented the troublesome story of Hawkins — an artist constantly on the brink of something better, but always held back by his own infidelities and secrets.

Watch Your Step is a collection of songs that Hawkins had sat on and accumulated over the course of an entire decade. Only three of the songs include a full band, which consist of Phillip Walker and his backing band: “Sweet Baby,” “Bring It Home Daddy,” and the second rendition of “Watch Your Step” found throughout Watch Your Step. Hawkins’ wife, Elizabeth, is featured frequently on Watch Your Step, contributing harmonies. This only enhances the mythos of Watch Your Step — even when Hawkins was accompanied by his wife, he still sounded like a torn, miserable bastard.

Some oddities are found on Watch Your Step, including a possible airline jingle, “TWA,” a now defunct airline. It is perplexing as to why this appears on Watch Your Step, but it somehow suits Hawkins style, adding the possibility that Hawkins was this close to making it. These brief lapses of cohesiveness are quickly forgotten on the charming and hissy “Lost Ones” and “Sorry You’re Sick.” “Lost Ones” is an incredibly haunting song — Hawkins’ vocal range is loose, his howls weary and worn down, his lyrics startling: “Icebox is empty and the food is all gone / This wouldn't be happenin' if my Daddy was home / No school tomorrow and no love from Mama / We are the lost ones livin' all alone.” Likewise, “Sorry You’re Sick” is a bewildering tale of alcoholism, Hawkins sounding desperate and helpless: “I'll buy all that your belly can hold / You can be sure you won't suffer no more / I'd swim the ocean or the deepest canal to get to you darling just to make you well.”

However, the idea of a reissue — or the reappearance of a long forgotten figure — is problematic in the case of Ted Hawkins. Hawkins’ legacy is a difficult one to make amends with. His behavior over the decades of his artistic relevance is quite unsettling, and it should definitely raise questions. These are delicate things to prod at, especially when somebody in a position of power abuses that very concept. It is a typical and, especially in recent years, endlessly onerous question that we as consumers must get to the bottom of: at what point do we separate the art from the artist? And, if the general consensus results in “forget them, they abused their power and traumatized others” (a very valid and blatantly true point of view), what does that entail for the others that labored and contributed to said piece of work? The backing band, the producer, back-up vocals, all the people who were involved in the creation of Watch Your Step, do we forget them as well? Perhaps the answer lies within the masses, or maybe it will be an ongoing debate, something that will never truly be settled, as art shifts and breathes as time passes, a concept that exists in a completely subjective school of thought.

And that’s what makes songs such as “I Gave Up All I Had” so afflicting — what once seemed infinitely saddening and beautiful limits itself in the wake of inappropriate behavior. The victim of Hawkins deserves recognition when his legacy is being considered. But at what point do we do so? When does this shift take place, when a remarkable piece of art is out again in the world, polished and represented as a reminder of what a great artist Hawkins was, rather than the person? I’d say that moment should come sooner than later — ideally, as soon as possible. Yes, Watch Your Step is indeed a masterful work of stripped down, hissy blues, sad-bastard music before the term was coined, charming in its crude methods of twanging love songs and regret, but it is also the pinnacle of a man who, for the most part, went unscathed for treacherous behavior. Watch Your Step can teach us all a lesson or two in the most absurd and hectic of times — it’s finally time to put our most beloved and revered artists’ legacies to rest, once and for all, and move on to those who simply respect what is truly right. Unfortunately, Hawkins’ reissue couldn’t have come at a more inappropriate time.