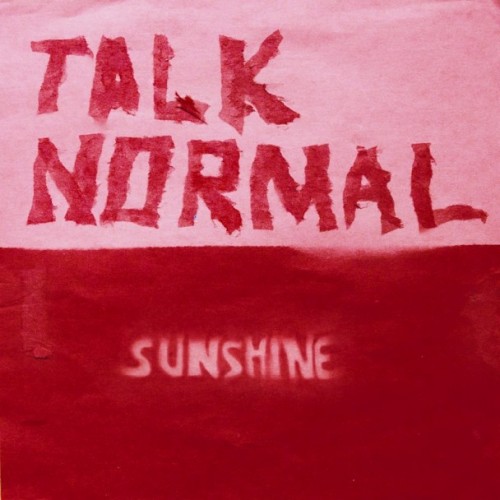 It sucks that I can’t call this one of the best albums of 2013. Not because it’s too early (it’s never too early). Not because it’s not as good as I want it to be – listening to Sunshine is like being thrown down a flight of stairs, only to be pulled back up with your head rattling against every step; woozy, delirious and glad to be alive. No, it’s a familiar, lame story – it originally came out in the US last year.

Make no mistake though, this is a great record. Talk Normal are clearly indebted to the foundations of post-punk and no wave, but crucially they never feel like a throwback. It’s there in the discombobulated gallop of ‘Lone General’, an organic pulse that makes the music seem alive rather than reanimated. Then there’s the way ‘XO’ grooves like that old Destiny’s Child favourite ‘Bootylicious’, only with the Stevie Nicks sample dropped in favour of steel factory machinery. Or the pseudo-glam stomp of ‘Shot This Time’, torn so beautifully between atonal and bubblegum. Pop on a knife edge.

‘Bad Date’ is the key that holds it all together. Sarah Register’s fuzzed-out, two-note bassline is played with such stony impassivity that it almost completely obscures Andrya Ambro’s semi-coherent wail (reverb and delivery adding up to make lyrics that have to be deciphered rather than sung back). At the 90 second mark, this hypnotic, unresponsive drone is suddenly locked in battle with skronking, free jazz-style sax – an unrestrained howl laid out against a mechanical, repetitive backdrop. If that ain’t the endless, frustrating ennui of what it’s like to be alive in the 21st century set to music, I don’t know what is. There’s an emotional pull, but not as the result of manipulative saccharine grandiosity, nor sappy, lovey dovey wordsmithery. It reverberates and shrugs like days wasted staring into computer screens; like relationships that barely exist outside of mobile phones; like the feeling of being more connected to everyone yet totally emotionally isolated from everything.

It makes sense that this should come out of a genre as imaginative as no wave. Sonic Youth used the same influences alongside lyrical themes from batshit sci-fi philosopher Philip K Dick and cyberpunk innovator William Gibson. The overall effect seemed futuristic and otherworldly – but now we’re living in that future. Just as those two authors proved more prescient than speculative fiction fans might have dared to dream, this music feels so curiously now that it’s hard to listen and not impulsively believe that it’s genuinely important. It’ll sound as good on your stereo speakers at home as it will on tiny earphones, fighting with rather than against the background noise of day-to-day existence. Fuck the sound of 2012, fuck the sound of 2013 – this is the living, breathing sound of your life and mine right now.