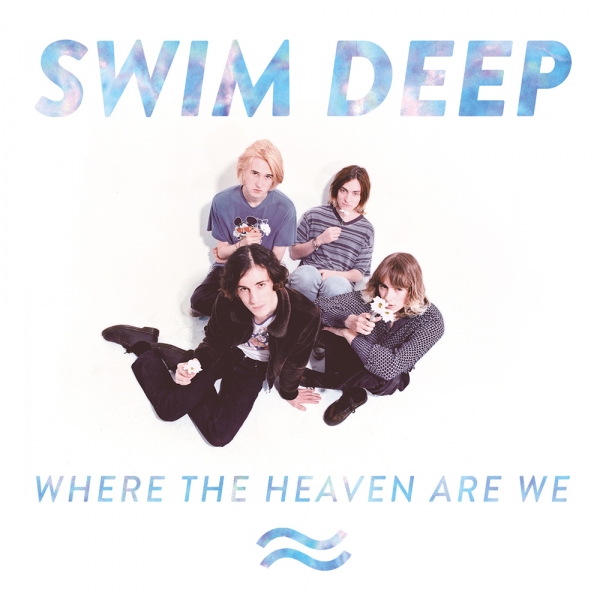 As Birmingham begins the paperwork for usurping nearby Manchester as the northern sonic hub, (okay, so it’s not strictly northern, but they do pronounce ‘grass’ funny and it’s above London, so close enough) a steady stream of acts start to flow out, including indie-rockers Peace. After a storming SXSW set earlier this year, Swim Deep became the poster boys of this musical influx, permeating a wider consciousness with a sound being described as ‘beach grunge’ and rip-roaring singles like ‘Honey’ and ‘She Changes The Weather’. Now that Where The Heaven Are We, their full-length debut, is about to hit the e-shelves, there’s no doubt we’ll be hearing a lot more of the youthful foursome.

The noises they summon are bathed in their inspirations, and they’re not particularly shy in demonstrating that fact. There’s more than a dash of The Stone Roses, a smidgen of The Smiths; much like recent baggy merchants Jagwar Ma have done, Swim Deep are re-appropriating dusty old ’80s/’90s sounds, polishing them up real good for a post-millennial audience who get all dewy-eyed and weak-kneed at the faintest whiff of nostalgia (‘The Sea’ perhaps being the best example). They’ve got SoCal panache. It’s not difficult to imagine Swim Deep as a kind of band who like bedraggled bleached locks, RayBans and saying ‘dude!’ a lot. It’s likely that the jangly guitar-pep and sun-snogged synths have more than a little something to do with conjuring this image (in reality, they’re quite fond of crisps and get hate from One Direction fans).

‘She Changes The Weather’ is a psych-pop paean doused in pop piano and swarms of shoegaze fuzz. There’s a faint chatter in the background – it sounds like a deliberate sample, but there’s every possibility that they’ve just caught snippets of background noise – though you have to listen fairly close to even notice. The cut contains deep-seated emotional heft; it’s gut-wrenchingly melodic, with no creative expense spared in making this an ode that embodies the term ‘bittersweet’ perfectly.

‘King City’ has all the makings of a summer anthem. It bears a passing resemblance to Is Tropical and The Naked and Famous via a quick kick/snare motorik, wobbly axes and slick bass licks, leaving a niggling “I recognise this…” feeling. There are ‘ooh-ooh-oohs’ that beckon singalongs, more synth hooks than you can shake a Roland at, and the kind of indie-pop beat that stomps right up to you, grabs you by the wrists, and starts forcing you to dance. Lines like “Fuck your romance/ I wanna pretend/ that Jenny Lee Lindberg is my girlfriend,” and “With the sun on my back it’s a nice day/ I will never choose any other way,” are destined to be slurred at high volume.

Non-single tracks like ‘Red Lips I Know’ and ‘Francisco’ are just as immediate. The former smooshes swirling, warped guitars akin to The Cure together with spacey ’90s pop. The latter has twinkling toy-synth motifs and a festival hangover vibe. Each track on Where The Heaven Are We is sculpted to be released as a standalone, regardless of that actually happening or not. You’ll struggle to find a track on the record that wouldn’t sit comfortably alongside smug sensation Rihanna or Olly Murs on Radio 1 (that’s supposed to be a compliment). Swim Deep are inciting glee with their music. It has wide appeal – the Gallagherholics at NME, pop fiends, the hipster elite and die-hard musos should all find something of worth within this debut. It combines the best of many worlds.

Twangy funk bass herals the arrival of ‘Stray’ – with tinny guitars and pumping percussion, it comes across as a semi-sequel to ‘Lovecats’ (though considerably more maudlin and less chintzy). It’s got a kind of emotive desperation: “Say what you mean/ Stay outside with me,” pleas Austin Williams to some unknown object of his affections during the chorus.

Swim Deep have already offered four cuts from this debut in one way or another, and each one has proved infectious, intelligent and damn fun. If you’re partial to what you’ve heard so far, then there’s little doubt you’ll be pleased with what’s on offer on the rest of the LP. Even if you’re not so keen, there’s such a vast array of sounds on offer – they careen through synthpop, psych-rock, lo-fi indie, grunge, Madchester et al. – that you’re bound to find something appealing. Where The Heaven Are We ably showcases their innate knack for massive hooks – it’s a rock-solid debut with something for everyone.