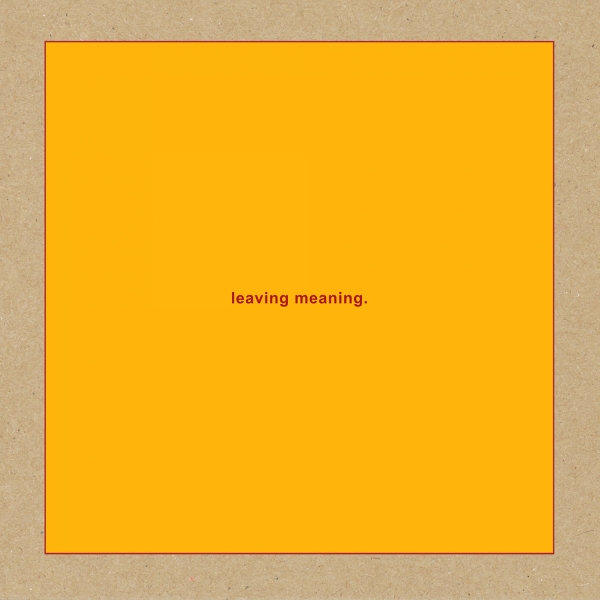 The music of Swans was always meant for bigger things.

Yet even during periods of activity and hiatus, their reputation remained one that was absolute. Imbued with cult-worthy status and cryptic vision, their take on experimental rock had the ability to shift the heavens while shuttering your core. Their fifteenth LP, Leaving Meaning, proves no different – while its bulk envisions similar methods from their yesteryear, their new outing is based primarily around unhurried structure and beautiful builds. Achieved throughout with a revamped and revolving crew of guests, its vast runtime alongside Gira’s steady narrative guide us to ponder a number of things: reality, our perception of existence, the unknown, and fate.

2016 saw Swans close yet another chapter of their career with their, at the time, last LP, The Glowing Man, followed by a reissue of 1995’s The Great Annihilator and Gira's 1995 solo debut, Drainland. But Leaving Meaning serves as a brand new chapter for Swans; however you slice it, Swans continue to remain one of the select few acts of their generation who’re able to maintain a sense of relevancy. As the trend for musicians breaking their hibernation become more and more frequent, the idea behind a comeback, although exciting, can be terribly nerve-racking. There’s always potential for backslide or whether or not the music will live up. Swans continue to remain on the outskirts – with its spellbinding aura of western and gothic motifs and post-rock touchstones, we realize immediately in that we’re still very much in the presence of the greatness that encapsulates their music.

“The Hanging Man” stands as the LP’s most straightforward Swans track – a song built around Gira’s commanding howls and yelps, sounding as a man overtaken and possessed. Its tribal percussion even calls to mind moments from Liars’ Drums Not Dead – but while the LP has a select scattering of familiar-sounding cuts, a lot of its basis is structured with time in mind. The stunning “Annaline” twinkles close to a gospel hymn while “Amnesia” evokes a foreboding folk tale. Here, Gira’s vocals remain enunciated and as sharp as ever, even icy. But in all its mesmerism, it’s difficult to shake Gira’s hold and contrasting delivery as he arranges the highs and lows of his hexing voice.

The ritualistic “Sunfucker” envisions a heady time-warp accompanied by maddening shrieks from Jennifer Gira; it’s a track that thrums about but breaks into a shuffling groove come mid-point. Songs like “Cathedrals of Heaven” ambles like a drug-induced trip; you almost feel as though you’re slowly being consumed in a pool of quicksand before it concludes. But while the theme of the arcane is artfully strewn throughout Leaving Meaning, we as listeners come to terms with just how specific Gira’s intentions are during the process by which he creates a world of strange magic. It’s done precisely and intentionally and that savviness is one of many reasons why Swans continue to turn heads. The stunning “It’s Coming It’s Real” sways unhurriedly, conjuring ideas about facing the inevitable. Its pace sets a dramatic tone, like we're about to meet our maker.

But even between Leaving Meaning’s slow-moving tracks, Gira and company offer its counterpart with execution and tact. The upbeat kraut of “Some New Things” is likely the LP’s most pop-worthy offering while “What Is This” shares a similar quality as it gaily marches with Gira’s vocals up front and confident, proving Swans have the ability to create uplifting, brightly songs if they choose. But even as their new offering has the best of both ends of what Swans are capable of, we learn what new beginnings consist of as well – how reflection is healing and cathartic. Few can graze by this type of output and execute it over and over. In its bone-chilling, earnest spirit, we witness Swans maintaining a power they never lost – we see them exceeding expectations, branding themselves as a seismic force in experimental rock, and here, they continue to touch on that greatness.