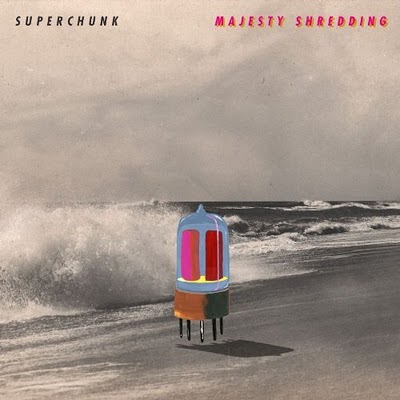 There are no blogs. There are no music-related websites. There are no websites. There’s no web. There are no mp3s. There’s no iTunes, iMac, iPhone, iPod, no “i” anything. No, we’re going all the way back to 1990, when a band of four out of Chapel Hill, North Carolina, first started writing and recording their brand of indie rock. Twenty years. That’s an eternity for many bands, but particularly interesting when one considers the rapid-fire, ever-changing landscape of contemporary music. And suddenly here comes Superchunk, still as energetic as ever, still writing songs that could sit comfortably in the track listing of an album where the liner notes displayed a copyright of 1995 or 2010. Sure, not much has changed stylistically for their ninth studio effort Majesty Shredding, but that’s precisely why it’s so damned good.

‘Digging For Something’ eases you in and gets you comfortable. It let’s you know that the familiar Superchunk you’ve known for so long hasn’t gone anywhere. The guitar interplay of Mac McCaughan and Jim Wilbur springs forward and you’re instantly reminded why Superchunk has had such a diehard and fervent following for those twenty years. But that’s just the warm-up, the setting of the stage. ‘My Gap Feels Weird’ ushers in a quicker tempo, a racing rhythm that makes you question whether the people who recorded this album are in their forties or their twenties, whether it was recorded recently or pulled from an archive of earlier material. It’s nice to feel that smile creep across your face, the subtle flex in your neck as your head bobs back and forth. This music, their music, often has that effect on you. Sure, there are tracks that remind us of the more thoughtful Superchunk we heard on Here’s To Shutting Up. But they’re few and far between as the lion’s share of the album is predicated on keeping the energy up. There seems to be a conscious decision with regard to the sequencing of tracks. Throughout the album, there’s a sprinkling of slower songs, but each seems to be bookended by tunes consistent with the Superchunk of yore. It’s a considered approach, one that never lets you get lulled into letting the album simply drift by. What you’re left with in the end is an album that, while I wouldn’t call the pace blistering, is certainly more up-tempo and reminiscent of their early years.

So here’s a case for getting back to your roots (not that Superchunk ever necessarily left them). Here’s to digging around and finding that thing you were so fond of, dusting it off and giving it another go. Superchunk isn’t trying to break new ground here. And perhaps that’s a good thing. They don’t need to do. The music world is all over the place now as compared to when they started. With things so fractured and people racing to cover, listen to and pontificate about the next sub-genre of a sub-genre, it’s refreshing to hear an album so straight-forward, so honest to the precedents of a band who’s done what they do so well for so long. There’s an old expression that starts by saying “if it ain’t broke…”