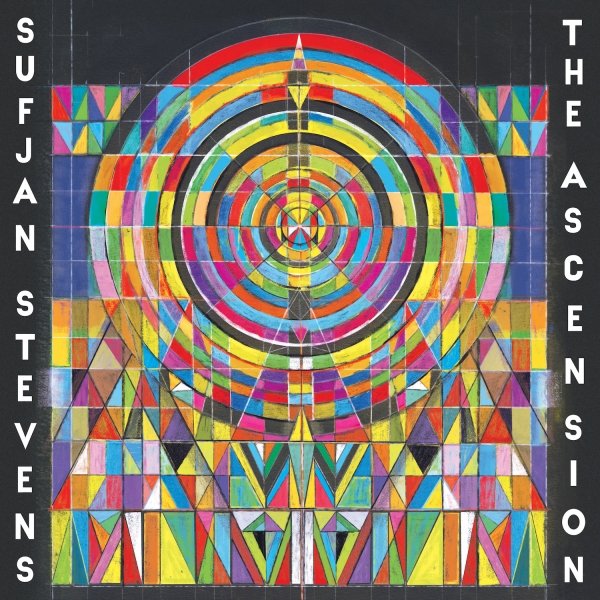 “I feel a universal dread that I had never felt before,” Sufjan Stevens confessed in an interview with Pitchfork in 2017, two years after the personal reckoning of Carrie & Lowell, his last song-based album, and an intimate reflection on the death of his mother. Three years on, that dread is expressed via expansive pop on The Ascension, an album that appears to chronicle a crisis of faith with distinct universality.

Both lyrically and musically, The Ascension appears to be driven by feeling rather than intense intellectualism. Here Stevens’ lyrics are suggestive, initiating a slow-burn response from the listener rather than the immediate dagger-to-the-heart specificity of Carrie & Lowell. Like last year’s double A-side “Love Yourself/With My Whole Heart”, The Ascension deals in well-worn pop terminology, in a language that belongs to everyone – something like hymnal syntax alluding to love (“Sweet fallen remedy/Come run away with me”) and God (“I am on the verge of sorrow/Tell me Lord which road to follow”). This is also reflected in the song titles, some of which – “Landslide”, “Run Away With Me” – feel like purposeful allusions to the pop canon.

Sonically, The Ascension has more in common with Stevens’ instrumental work than his ‘song’ albums. Its wide-eyed expansiveness draws from the electronica of early song cycle Enjoy Your Rabbit, and this year’s Lowell Brams collaboration Aporia – with which it also shares a sense of narrative driven by composition rather than words. The album is largely electronic, each song a new environment of horizonless synths. The guitar solo that appears halfway through “Landslide” is unusual enough to feel miraculous. The songs share an unrestrained nature with 2010’s The Age of Adz, but – aside from the jittery “Lamentations” – they are less hysterical and more elegant, and distinctly the work of an older artist.

This combination of stripped-back lyricism and expansive musicality contributes to the sense of The Ascension as Stevens’ most plainly spiritual record to date. The album’s non-linear narrative is one of faith lost and won, seemingly a direct result of the intimate reflection of Carrie & Lowell. On the opening track “Make Me An Offer I Cannot Refuse”, Stevens appears stripped of his belief, almost daring higher forces to deliver it back to him (“Show me the face of the radical dream… Lord I need deliverance/Make me an offer I cannot refuse”). “Die Happy” begins as a woozy, psychedelic incantation, with Stevens repeating his wish (“I wanna die happy”) until the surrounding instrumentation takes on the burden of his frustration and desperation. On “Tell Me You Love Me”, he addresses God, or a lover (or both, it’s often hard to tell with Stevens) directly, pleading for reassurance (“My love/I lost my faith in everything/tell me you love me anyway”). In the latter part of the song, he shouts with abandon as he assumes the role of a higher power (“I’m gonna love you anyway”). This dual role is almost therapeutic, reflecting a self-reliance born from practice or necessity.

The final two songs are an ambiguous conclusion to Stevens’ crisis of faith. Lead single “America” sees Stevens reckon with the hopelessness of faith in a country sliding towards fascism, which uses God as an excusing false figurehead. The lyrics are heavy with biblical imagery (“The sign of the cross awaiting disaster”) as Stevens pleads with God not to abandon him as his country has been abandoned. The title track, sequenced penultimately, is a complex and enigmatic reflection on unfixed spirituality, a life-long search for meaning, and personal regret. This astonishing song builds and builds, a continuous phrase waiting to spill over into the exaltation that Stevens alludes to, and then – after almost six minutes – nothing. It is his failed quest for meaning made real.

For all its enormity, there is a sense of unresolved isolation to The Ascension. The listener is left with the underlying feeling that with or without faith in a higher power – God, or a lover, or the abstract idea of love itself – we must, like Stevens, face our personal and universal demons alone.