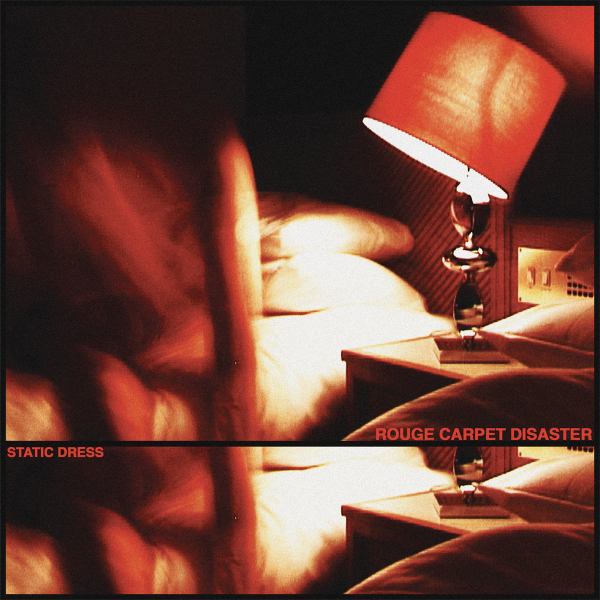 Emo history is being made and we’re watching it rapt. With a needle-sharp focus and a dizzying sense of intention, on Rouge Carpet Disaster Static Dress are cutting through the noise, fathoming something forcefully grounded in legacy into something viciously fresh.

It’s part of what defines them as a band. When they released …The Prologue in November, it was abundantly clear that we were listening to a band on the brink of something great – and that’s precisely what Static Dress intended. But it was just a hint at what was to come. The Prologue, with its accompanying graphic novel and ferocious, emo-nouveau sound, could easily have been Static Dress’s great breakout record. But, no – somewhat predictably now, given that they literally named it The Prologue – it was just an appetiser for something even more astounding.

Enter Rouge Carpet Disaster. An immersive concept record made up of individual golden vignettes that both stand solitary and tie together seamlessly – not to mention an excellent post-hardcore masterclass. The theatrical flair that The Prologue and Static Dress’ music thus far has demonstrated is dipped in darkness and threaded into something intoxicating, through almost-indecipherable tales. The specific meanings behind tracks, whether they’re about this or that, or an imagined moment or reality, are almost secondary to the vivid atmosphere that Static Dress create – Olli Appleyard’s fiercely versatile vocal performance is world-class even just on opener “fleahouse”, careening from soaring hooks to deathly growls and screams in an instant.

Versatile, and vital Rouge Carpet Disaster easily begs comparisons to legends of rock history, but then in the same breath defies them. With My Chemical Romance returning to the world stage the week of RCD’s release, the trails being blazed are all too closely entangled, the black-and-red melodrama of Three Cheers For Sweet Revenge a familiar touchpoint, especially when paired with the sheer skill with which Static Dress construct the internal worlds of each song. But the skill lies in that while every track is distinct, they’re also all distinctly Static Dress – an architect’s blueprint pulls together the pulsing guitar riffs of “…Maybe?!”, the intricate narrative of “cubical dialog” falling out of the sky in amongst visceral instrumentals, the riotous whirlwind of highlight “Courtney, just relax”. Even structurally, no track flows the same, but they all flow together with no moment of disruption (even from Prologue, which when listened to as a prologue flows directly into “fleahouse”).

Static Dress, for the most part, are running at a fever pitch across Rouge Carpet Disaster, but there are some breathtaking pauses that only serve to drive tensions up higher. In “Lye Solution”, this looks like a moment in which all the instrumentals choke leaving Appleyard screaming solo, distorted and magnetic. It paralyses you into paying attention even more avidly than before. But then just two tracks later, on “Marisol”, Static Dress sink into softness for a melodic, beautiful prelude to the intensity of “cubical dialog”. It’s almost painful as the flickering percussion nudges the track forward through ethereal synth textures, even descending into strings at the end. And it boasts one of Appleyard’s most evocative deliveries on the record, shimmering with restraint and bursting to life when he’s ready.

And as the album crackles to a close, there’s an immediate sense that this isn’t it. If Static Dress have shown us anything about themselves, it’s that despite Rouge Carpet Disaster being exceptional, it’s that they already know what’s coming next, and it will be better.