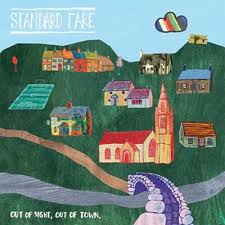 Standard Fare create classic guitar-led indie pop with all the froth and fever that invariably means too many words are crammed into each three minute track, making it hard to keep up with the tales of love lost, lust found and the full range of emotions and feelings that accompany both of the above. Their delightful 2010 debut, Noyelle Beat, was packed full like this, as is new LP, Out of Sight, Out of Town.

The trio’s made-in-my-bedroom sound makes listening to their music feel like your own private concert, which is great but can occasionally do them a disservice. Despite the addition of a trumpet and violin on their latest record (courtesy of Brad San Martin from Boston’s One Happy Island and Emily Gunn from fellow Sheffield-based band Nat Johnson & the Figureheads, respectively), Standard Fare still sound remarkably raw. Some songs almost cry out to be edited/refined/have something that makes them fulfill the promise shown on Noyelle Beat, because as soul-warming and fun-to-listen-to as they are there’s a sense that Out of Sight, Out of Town just hasn’t moved on very far.

Bassist and lead singer Emma Kupa’s piercing vocals take charge and it is this that gives the band their distinctive air of heart-on-sleeve. Album opener ‘Look for Lust’ sees her unique voice immediately set the tone for the rest of the record, soaring over the twinkling guitars and tickling drums. Every song has its twee moment, be it the “b-b-b-bite my tongue” of ‘Dead Future’ or the cute guitar jangling on ‘Suitcase’, but Kupa’s singing balances this nicely and it is this which sets Standard Fare apart from the rest of the indie pop scene and makes them a genuinely interesting and exciting band.

Onwards and the 1 minute 57 second stomp that is ‘Bad Temper’ is almost Blink 182-esque in its hurried guitar frenzy and collegiate rock feel. Last Spring’s single ‘Suitcase’ pops open like tightly packed bag of sweets, its rather more serious lyrics somewhat played down. ’Older Women’ and ‘Early That Night’ slow the breakneck pace and allow time for a breath between verses, providing an enticing glimpse of where the trio of Sheffield-based twentysomethings might next go with their musical ambitions. On final track ‘Crystal Palatial’ the tempo quickens once more, but it’s a softer, calmer and more grown-up melody that arrives at the end of the record.

The unchecked energy of ‘Fifteen’ and the quirky passion of ‘Philadelphia’ may be missing on this latest collection of Standard Fare songs, but as the band themselves state, Out of Sight, Out of Town is an album written and recorded both in and about that state of limbo in which many people find themselves between twenty and thirty years old. So, while it is by no means a bad record, there’s the feeling that the trio still have a lot more to come.