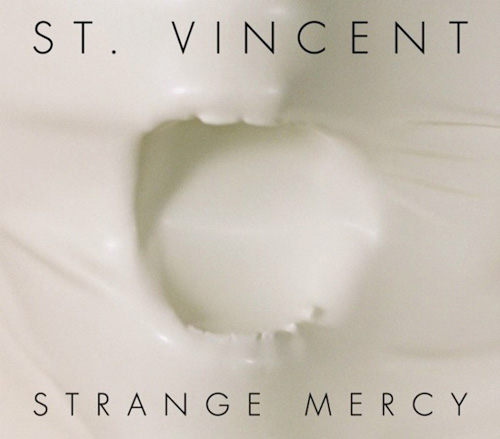 The main draw with Texan indie darling Annie Clark, aka St. Vincent, has always been her unprecedented versatility. Debut Marry Me found her going from disillusioned, heavy-lidded housewife on the title track, trilling “we’ll do what Mary and Joseph did without the kid”, as painfully aware of the fallacies of ticky-tacky suburban life as Frank and April Wheeler, to shell-shocked soldier on ‘Paris Is Burning’, cooing “send my cinders home to mother” over spindling, claustrophobic instrumentation; drubbing drums and oozing horns pressing in on Clark’s frayed vocals like masked strangers leading the wide-eyed ingenue down a dark alley. And follow-up Actor was no less diverse, finding Clark shape-shifting from slighted lover in ‘The Strangers’ (“playboys under the matress, like I wouldn’t notice”) to hysterical sooth-sayer on ‘Marrow’. The only constant in Clark’s music has been the album art – all disarmingly gorgeous portrait shots, her doe-eyes and bubble-cut curls preened and perfected, her features poised in a tempered Mona Lisa smile, reminiscent of the heady, faintly narcotisised studio shots of Hollywood starlets from the 1950s.

So when Annie eschewed the pretty portrait shots for an arty photo of her mouth screaming through a layer of latex, followed by a series of zeitgeist-y promotional tools; a twitter campaign encouraged users to tweet the hashtag #strangemercy to unlock teaser videos and tracks from the album – one teaser featured a clip of animals eating their young – “It is not uncommon for a mother feline to eat or kill their young if they are sick” said the narrator, as ‘Surgeon’ hazed omniously in the backdrop. A video circulated of Annie covering Big Black at NYC’s Bowery Ballroom, purring “I think I fucked your girlfriend once… maybe twice, I don’t remember! Then I fucked all your girlfriends, now they hate you!” in her trademark honeyed tones. It’s a million miles away from the girl who once proclaimed herself “a wife in watercolours”. Annie’s message was pretty clear: shit was about to go down.

But what of the actual album? Strange Mercy kicks off in good stead – opener ‘Chloe In The Afternoon’ is one of the most exciting things one is likely to hear all year. It’s an odd, nebulous shape-shifting beast, pitting Annie’s hiccuping, disneyish vocal purling against fairground synths before being corroded by lusty riffing; Annie repeating the track’s title as it all shudders to a seasick conclusion. It’s the perfect concilliation between Annie’s disney princess alacrity and her nascent, riot grrrl fury – like Sleater-Kinney shot through a bubble-gum pop filter. Meanwhile, ‘Cheerleader’s ebullient, hinge-rattlingly massive chorus blows the cobwebs from Clark’s more experimental leanings, while ‘Champagne Year’, as well as being a literal Champagne Year (Annie is turning 28 on the September 28th, hurrah!) is also an educated nod to the hopelessness of the financial crisis, featuring Annie in full-on gloom-mongering mode, sighing “when I said it was going to be a Champagne Year…” with all the lost optimism and burgeoning rage shared by most of the world’s population. This is indie-rock with a conscience, and when Annie bemoans that she “tried so hard to be clever” (‘Cheerleader’), you hope she never stops – because it works.

‘Surgeon’ is ostentatiously weird – just when the track settles on the pretty “get along, get along, get along” refrain, Annie does a musical u-turn and begins squawking “best finest surgeon, come cut me open!” over funky, Hendrix-esque guitar and teetering strings. Annie’s riffing has always been her secret weapon, the golden arrow in her already jam-packed quiver – while her breezy good looks may trick you into thinking she may be more prediclined to sedate acoustic plucking, think again: this chick can play.

Case in point: ‘Northern Lights’. By far the album’s most prosaic indie rock track (well, as prosaic as Annie can get), Clark’s febrile guitar races through the tale of a relationship gone sour (“well I guess it is what you say it is, but I don’t feel anything”) her glorious voice swooping and swan-diving so effortlessly it’s easy to miss the heart-break and honesty that lies beneath, before the whole thing ends with a guitar solo that sounds like the air being let out of a balloon. And that isn’t the only display of axe-wielding mastery: throughout the course of Strange Mercy, Annie races through South Youth-y dissonance, self-conciously funky psych-outs and even a cheeky nod to ‘Hallelujah’ on the faint guitar braiding that wends its way through the social paranoia of ‘Champagne Year’.

For all it’s good points (and believe me, there are quite a few), Strange Mercy isn’t a straightforward listen – there are extended guitar noodlings, off-kilter electronic textures and a whole host of wordy literary references jammed into melodies that don’t quite fit. But while Clark may allow herself an extended solo or two, there’s nothing indulgent about Strange Mercy – it exists somewhere in the hinterland between Joanna Newsom’s unabashed indulgence and The Yeah Yeah Yeah’s efficient, furious pop. I mean, all Annie’s songs at least have choruses, or at least some faintly catchy motif you can make a stab at humming in the shower, they just take their own sweet time getting there. But aren’t all the good things in life slow-burning? Strange Mercy is yet more proof that there’s nowhere in life worth going to if you don’t enjoy the trip.