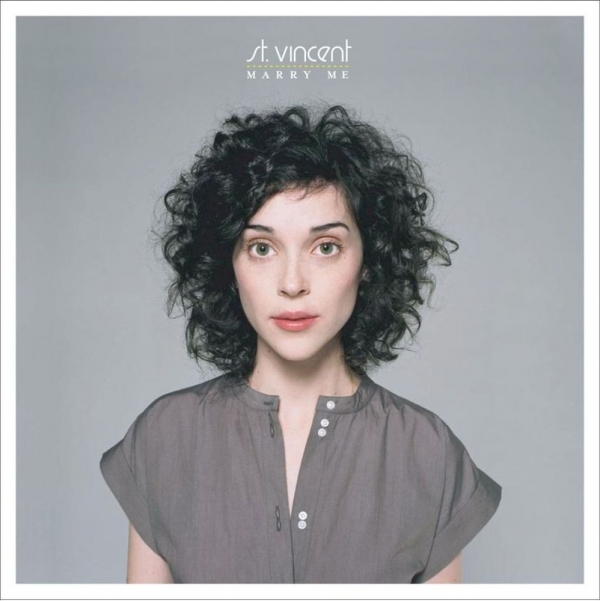 Recipe for a refreshing autumn smoothie: take the syrupy tones of a Madeleine Peyroux, a dash of Enya for misty depth, some Kate Bush for exotic undertones, and zest of Laurie Anderson for weird bite. Blend until not quite smooth enough to pacify. It’s called a St. Vincent, and should keep you perky for at least a few months. The inventor of this mouth-watering concoction is Chicago multi-instrumentalist Annie Clark, who you might have heard with the Polyphonic Spree or seen playing guitar with them or Sufjan Stevens on tour.

The first time I heard single, and first track, Now, Now I was hooked on its forceful individuality, snap, crackle, pop guitar tones, and refusal to buckle down and settle into a regular tune. But, initial half-hearted forays into the album left me unmoved and inclined to regard it as some sort of dippy novelty effort that did not come off as an extended whole. However, a couple of listens later and I’m smitten. It soothes without being snoozy and offers a Pandora’s Box of busy musical sprites swirling over foundations of eclectic beats, silky orchestration, and soft creamy vocals that deliver words that can be sentimental or sarcastic. There’s everyone from Pinky and Perky to the Sleeping Beauty Disney choir on backing vocals, and everything from Within You Without You eastern strings, spiralling sprints across grand Steinway keys and raw electronic blips, to playground chants, gutsy guitar and thumping pedal drum. Jesus Saves, I Spend, and Your Lips Are Red, second and third up, are just as strong. Changes of tempo and shifts of style occur within almost every song as if each is made of self-empowered play dough, containing the energy to spontaneously transform itself so as to be unrecognisable by the next time you visit. Finally, What Me Worry is smoky Fabulous Baker Boys jazz entirely untouched by the weirdness, and closes with “I’m out of here”. Perhaps, but this oasis of uniformity serves only to give the brain a respite before hitting the play button once more.

There are some caveats. It might be loved by many and loathed by others – there will be no middle ground. Strange thing is, I have a suspicion that some of these songs are slight, and would not stand over exposure without the complex surround-sound. Yet somehow Clark conjures up durability with a magician’s cloak of aural dexterity and deception. Quite what they’ll sound like live is another question. It may be intense and mesmerising, or a thin shadow of the rich feast here. You can find out in November when St. Vincent tours opening for The National (solo rather than with a band I believe). I was thinking of being there anyway, but now there’ll be two reasons for attending.