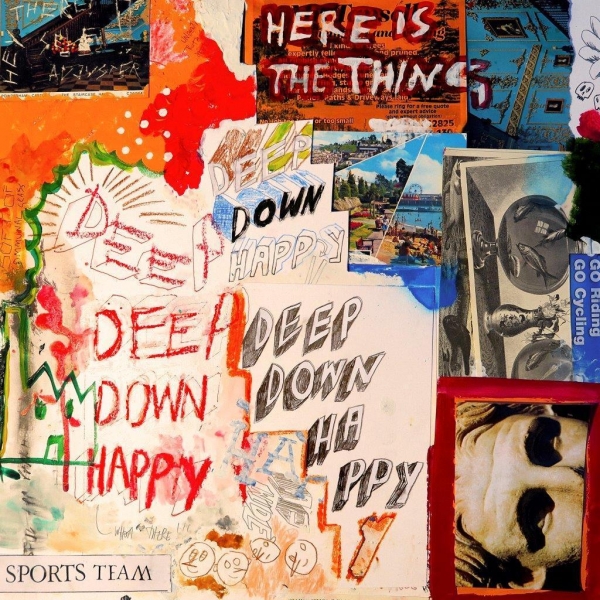 Sports Team are a band with brazen ambition and high expectations.

Rocketing from a promising breakthrough to becoming one of the most thrilling acts on the current live circuit with notoriously incendiary shows, they’ve ascended to cult-like status with just two EPs. Fashionably late, debut album Deep Down Happy arrives into the hands of salivating indie kids in all corners of suburbia.

Sharing a house in Camberwell after meeting at Cambridge, the six-piece are rooted in community. Sharing a less than conventional relationship with their fans via Whatsapp groups and Instagram meme pages, it’s safe to say they know exactly what their audience want and deliver it tenfold. Combining the spirit of Britpop with the attitude of modern day post punk, tracks like “Going Soft” , “Here It Comes Again” and the familiar cries of “Camel Crew” and “Kutcher”, swell, expand and know just when to pull the pin into an eruption of chaos.

Though we’re used to flamboyant frontman Alex Rice mouthing off by now, it’s a refreshing twist to hear guitarist and chief songwriter Rob Knaggs’ vocals peppered throughout the record. On opener “Lander” (headphone warning) he lends his voice to kick and scream about packing lunches, hunting foxes, and a shit Slug and Lettuce.

Stand out tracks “Here’s The Thing” and “The Races”, are superb displays of wit and sardonicism. “He’ll never buy a drink but he’ll let you know he can” and proclamations of how “It’s all just lies, lies, lies”, all soundtracked to galloping guitar lines and propulsive rhythms. A middle finger to Conservative Britain; one part gammon faced Leaver and one part Thursday night Broadgate Circle thirty year old reeking of Dior Sauvage.

Bookended by the phrase “You can always go to London”, whether it’s doing drugs or finding love, Deep Down Happy expresses those smalltown suffocations and inequalities paired with massive choruses and the pithiest of lyrics. In light of the current situation, the record’s delayed release actually works in its favour, allowing us to look inward and discover what really makes us Deep Down Happy - whether that be sourdough starters or listening to one of Britain’s brightest guitar bands.

“This ship is unsinkable,” cries Rice on "The Races" - you sure got that right.