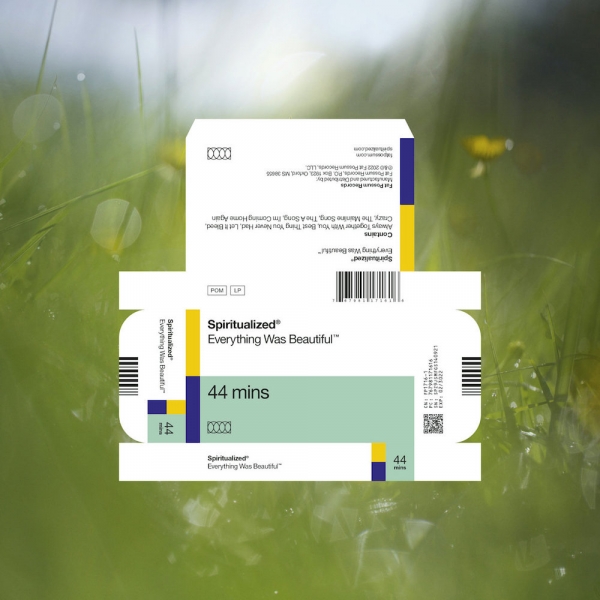 Jason Pierce’s primary motivation throughout his career has been the reconciliation of extremes: minimalism, maximalism; euphony, cacophony; buoyancy, heavy-heartedness.

With Everything Was Beautiful, this aesthetic MO is applied with consistent virtuosity. Over seven tracks, Pierce fuses some of his most infectious songwriting and enthralling compositions to date, the project serving as another highpoint in an already signature oeuvre.

“Always Together with You” is built on a catchy melody and romantic lyrics. Pierce, however, quickly morphs the piece from a wistful ditty reminiscent of Stephin Merritt circa 69 Love Songs into an audial epic, employing an arsenal of back-up vocals, drums, synths, and alternately choppy and sultry guitar strums. The piece embraces the immediacy of the singer-songwriter paradigm while further mining Spiritualized’s previous forays into nuanced psychedelia and transportive space-rock.

“Best Thing You Never Had (The D Song)” again points to Pierce’s songwriting acumen and the band’s ability to render sophisticated soundscapes. At the same time, the track effuses a spontaneous vibe a la The Stones’ Exile on Main Street or Talk Talk’s Spirit of Eden and Laughing Stock. Bluesy guitar rhythms and lead runs are offset by well-blended horns and subtle fluctuations in volume and intensity. In this way, a refined production approach is conjoined with an improvisational energy. “Crazy” finds Pierce likewise navigating a seductive tune that recalls Tom Waits’ “I Hope That I Don’t Fall in Love with You.” While the song’s intro is relatively spacious, Pierce soon adds drums, lap-steel guitar, and swirling accents while never losing sight of the song’s melodic and lyrical emphases.

The opening of the slower “Let It Bleed (for Iggy)” is notably austere. Pierce and company, however, soon launch into unrestrained sonic expressionism. Noise-rock leanings bring to mind 2003’s garage-y Amazing Grace, elemental songcraft merged with a progressive concept that might appeal to fans of Black Midi and/or Darkside. “The Mainline Song” unfolds in similar fashion, Pierce operating like a jazz auteur. He establishes the piece’s melodic, rhythmic, and tonal foundation, then adds vocal, ambient, and percussive accents, the song’s earworm chorus contextualized but never obfuscated by intricate instrumental interplays.

The final two songs – “The A Song (Laid in Your Arms)” and “I’m Coming Home Again” – are transcendent productions that frame Spiritualized at a creative and performative apex, revisiting and perhaps exceeding the heights attained with 1997’s Ladies and Gentlemen We Are Floating in Space and 2012’s Sweet Heart Sweet Light. The former tune features a rollicky soundscape that wouldn’t be out of place on Springsteen’s first two albums, Pierce’s vocal punctuated by instrumental segments that touch on ambient-sprawl and noise-jam approaches while never compromising the piece’s thematic focus.

The 10-minute “I’m Coming Home Again,” meanwhile, spotlights Pierce as he constructs a volatile soundscape, including an obliquely nihilistic narrative delivered via a gospel-inflected tone. “I’ve kind of had it with philosophy / because I’m thinking I am / but I’m failing to be,” he moans, depicting a spiritual limbo, how so much of our suffering is the result of an inability to embody our lives, a dissociative tendency often connected to past and ongoing trauma. With its slow build-up, steamy melody, sultry timbre, and impressive arrangement, the track is the album’s pièce de résistance and one of Spiritualized’s crowning achievements.

In terms of songwriting, instrumentation, and production, Spiritualized’s ninth studio release represents what may well be Pierce’s most ambitiously envisioned and impeccably rendered project, a testament to unwavering vision and meticulous execution. Everything Was Beautiful shows Spiritualized accessing yet another artistic plateau, forging an exemplary hybridization of unshakeable songs and sublimely assembled music.