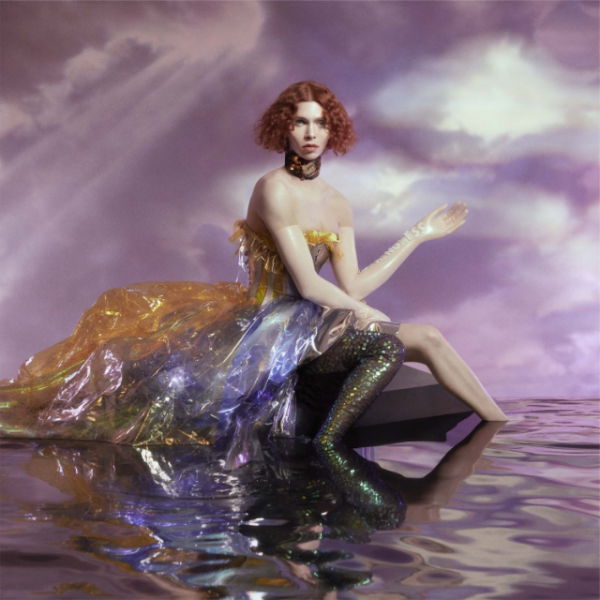 Pop music, no matter the qualifiers, is supposed to be rooted in the accessible, something all-purpose that everyone can listen to and not feel alienated.

On the other hand, the mere mention of trans people can set off a flurry of obnoxious pronoun ‘corrections’ and jokes about identifying as an attack helicopter on any given social media platform. That’s before the harassment and systemic inequality trans people face all over the non-virtual world. It all puts added pressure on trans people - already under a searing spotlight as it is - to succeed on their own terms.

So do you move the focus away from your identity and take any chance you get, even if it compromises your morals? Do you work behind the scenes? Or do you specifically target what transphobes hate about you, rendering criticisms irrelevant? That last option was SOPHIE's choice. As if a direct response to the accusation that trans women are mutilating their bodies, SOPHIE’s face literally getting cut up in a terrifying, strobe-heavy video (because apparently the SOPHIE utopia is not for epileptics), and here are some exaggerated prosthetic cheekbones to boot. SOPHIE notably doesn’t often use words like ‘trans’ or ‘queer’ in her interviews - it’s not that she ignores it, it’s just she wants to speak for herself.

Those songs - “It’s Okay To Cry,” “Ponyboy,” and “Faceshopping,” open the album in that order balancing SOPHIE’s pop instincts with her weirder ones. “Faceshopping” is a highlight, both visceral and compulsively listenable, using Photoshop as a metaphor for becoming more comfortable with her body: “[With] things like body augmentation, you can find something that’s actually more real, which was my experience with electronic music and synthetic materials.” Those percussive, metallic clangs, used on Vince Staples' "Yeah Right" and more recently on Let's Eat Grandma's "Hot Pink", are like the SOPHIE version of a producer tag. Yet they’re sparingly used aside from the opening three songs as the record delves into more ambient territory.

“Infatuation” is surprisingly moody, but the vocal processing sometimes detracts from the genuinely pretty moments like the intense but never shrill guitar-synth. That restraint is needed in a song about the specifically queer variety of obsession. The want to become one person with someone you idealize (an “urge to merge”) is a very real thing, and there’s a correlation between “I wanna know/who you are/deep down” to “you could be me and/I could be you” in standout track “Immaterial.” To get there, it takes six-minute interlude “Pretending.” For its first half, “Pretending” sounds how dysphoria feels - quiet dread, with gorgeous synth pads obscured by murky effects and heavy compression. It's haunting, but at six minutes, also drags a little, perhaps like any six-minute ambient mood piece would.

Meanwhile, “Immaterial” is the best song SOPHIE has ever produced: it's an outright anthem. When you’re trans and derided for dressing femininely, then mocked for being too masculine, why not just embrace that you'll never be “enough” for transphobes the world over? Guest singer Cecil Believe exclaims “I don’t even have to explain/just leave me alone now/I can’t be held down,” which feels less escapist and more aspirational. “Immaterial” sounds beamed in from a universe where trans people are allowed to just exist, without unreasonable hatred or well-meaning but awfully intrusive questions, where the validity of their self-expression isn’t debated on national TV.

That gender euphoria quickly subsides, as “Whole New World/Pretend World” takes every unpleasant feature about the album - the lack of structure, the tinny synths - and puts it into a nine-minute stretch difficult to sit through. It’s as uncomfortable as possible, which will be thrilling for some but overdone for others. For an album fundamentally about emotional connection, the final stretch is easy to admire but difficult to engage with on that level.

We wind up with an album much like its title; OIl of Every Pearl’s Un-Insides is difficult to comprehend, and even knowing the meaning doesn’t make “I love every person’s insides” any less weird. But there always is a meaning, and that’s what makes SOPHIE vital as an artist. If transgender people continue to face the scrutiny they do now, there are worse people to lead the charge than someone who exemplifies every bad thing a transphobe could say, then turns it into a source of strength.