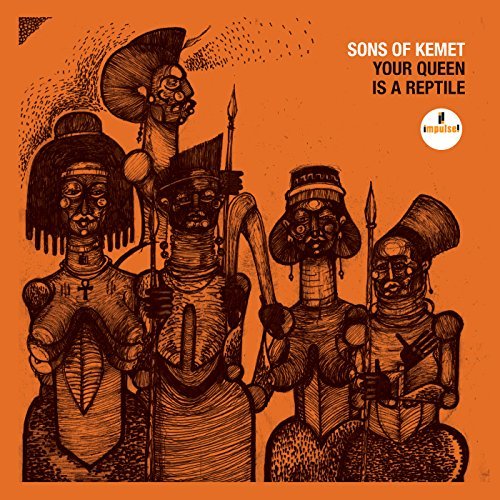 After several decades in the doldrums, the label once known as the home for ‘the New Wave of Jazz’ was revived in 2015, and is returning to its former glory releasing urgent, powerful and challenging new jazz material, from artists like Sons of Kemet.

Formed in 2011, the group comprises two percussionists, a tuba player and is led by charismatic bandleader, saxophonist Shabaka Hutchings. Their third record, Your Queen is a Reptile, strikes at a point when politics and social movements are on everyone’s lips, and the forces that hothoused jazz in the ‘60s are once again at the forefront of creativity. Strolling between claustrophobic, pleasantly disorienting tunes, to gently swaying melodies and sultry, sun-baked harmonies, Sons of Kemet’s latest release is very much jazz for the 21st Century.

It listens more like a book of poetry or short stories than a complete novel. Each track is titled for a black female activist, representing this potent and influential woman by balancing the subtle nuances of her character with the enormous wider social change that each of them contributed to, led, altered, and agitated for. Codified within each piece is a sense of not only the frustration that these marginalized women must have felt themselves, but this is almost mirrored in the frustration that the band have with the form – there’s so much to say, so much to convey, so much simultaneous fact, emotions and messages. Where to start?

This tension creates a wonderful jazz record. Rich in sudden changes in tone, wild crescendoing climaxes of simultaneous percussion and reeds bring both a sense of urgency and danger. This is jazz in the truest sense: the players have their riffs, but are testing each other. Codas materialize, drift off almost imperceptibly and reappear; Hutching is constantly restless, whirling between the wombling tubas and doubletime percussion to sow genuine storytelling into each track.

The richness of the source material and the deftness of interplay of each member of the band ensures that Your Queen is a Reptile leaves you with a sense of having been a part of something truly special. Predictions aren’t our thing, but Sons of Kemet, and indeed Hutchings, are names that should endure, and are truly worthy of the label’s storied history.