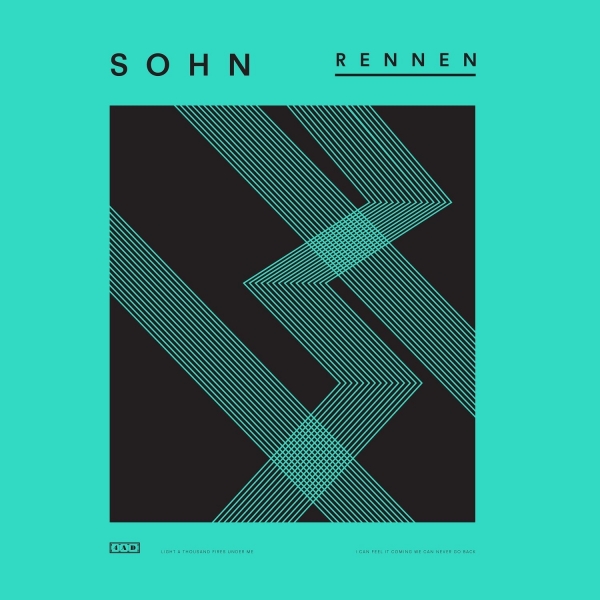 Running, the title translates as, and to be fair it seems as good a response as any to the year we’ve just had. Between the grim reaping and the political arseholery 2016 had us looking more than once at sneaking out in the night for a cave in the Alps, before we realised just how screwed we were by the exchange rate.

SOHN, though, has gone further still, fleeing Vienna for LA and then Bon Ivering to an isolated house in northern California for solitude and songwriting, fusing the chilly, glitch-strewn R&B of 2014’s Tremors with the massive skies and paranoid twitch of the West Coast. It’s a cultural shift that’s evident from the off, in “Hard Liquor’s” sleazy cinema of addiction and brooding, factory beats - a song written for someone else but right at home on an album that ranges from finger-snapping harmonising to Warp Records-esque deconstruction, those jagged angles on the cover reflecting a tracklist that takes more than a few left turns.

Sure, first single “Conrad” is as dancefloor-primed as anything that SOHN (or Christopher Taylor) has put out before, the vocals pristine and the choruses propulsive, but even there there’s hints of something more, the strafing synths driven with percussion wrought from empty bottles, kitchen utensils and the house itself. “Signal”, meanwhile, erupts from slow-burn understatement into a magma of seething, viscous sound, voice and keys melting together and exploding spectacularly, whilst “Harbour” builds from prayerful acapella to bruising Berghain electronica, an extended album outro that writhes and contorts with equal parts energy and menace.

Would it be uncharitable to say that these are the best bits - the walls of noise that kick in when the vocals give out, almost suffocating in their intensity, invigorating in their abandon? Taylor has a great voice and there’s some fine writing to be found right across this, but Rennen is definitely most compelling when it forgets about the song and just lets go, throwing arms up to the speaker stacks and letting the sweat flow down. With the four minute runtimes and the mid-album balladry there’s a touch too much cling here to the pop song, to the constraints of a structure based on mass consumption when often it feels as if SOHN wants more than just wide appeal. The video for “Signal” seems proof enough of that, shot in arthouse noir by Milla Jovovich with her face streaked with makeup and anguish, the single take and juxtaposed images uncomfortable to watch.

Elsewhere there’s societal comment, with “Conrad” alluding to European unrest and “Primary” criticising the US election and the bigotry that came with it - “I thought we were past this, I thought we’d grown / It’s just 80 years since we did this before” - suggesting an artist looking to engage much more readily with the world than his escapist vistas might imply. “Can I wake up now?” he asks on the latter as the beats die out abruptly, the vocals warped but the plea sincere.

Alas, if only we could. But as a soundtrack to a new era where we’re all through the looking glass, old certainties bonfired and every phone alert quickening the pulse, Rennen hits the right tone - its rhythms shivering and uneasy, its melodies veering from melancholy to euphoria in a single stride. This is an album we can both dance and cry to - and lord knows we’ll likely need a lot of each in the months to come.